Brackaville, an outer-Coalisland nether region that most people just drive through, was awash with rumour last night that one of their favourite sons didn’t get his Kerr’s Pinks after work. Patsy Rea, an aged Brackaville labourer, was expecting his daily dose of potatoes, cabbage and bacon but was reportedly furiously enraged to be faced with a plate of curly pasta and a mild salsa sauce. In an attempt to ‘get with the times’, his wife Maisie dished out the unique meal shortly after the Angelus on the wireless, having watched ‘one of them cooking programmes’ on RTE earlier in the day.

“Ask any man”, Rea told us, “and he’ll tell you that all a brickie thinks about from 3pm onwards is the big feed a spuds. It’s what keeps ye going. Like today I was digging a hole again. I’ve been digging the same hole for three months now. To come home after that and to have to look at this oul hatchet-faced bitch is one thing but then to be presented some some kind of foreign shite on a plate. Well, no man could take that.” 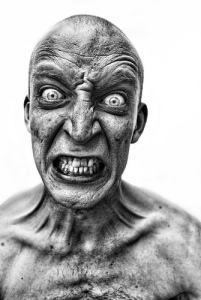 Patsy Rea on the rampage

Neighbours reported that Rea went into a frenzied rage through all the gardens in the estate, pulling trees and plants out by the root and shouting obscenities directed at his wife and life in general.

“I was frightened at first”, one neighbour told us. “We had just sat down to watch The One Show after a tremendous gorge of Greek spuds. Out of the side of my eye I saw my wife’s prize dahlias soaring through the sky. I headed out to give Patsy a good hiding until he told me about the pasta. Sure it’s like a death in the family. I couldn’t even imagine his resentment and I can tell you now – I’d completely wreck Brackaville and half of Coalisland if I was given a plate of that shit.”

Rea eventually calmed down and ate the pasta, claiming afterwards that “it wasn’t bad.”