Rock Rampart Riot Over Whether Mrs Brown’s Boys Was Funny. 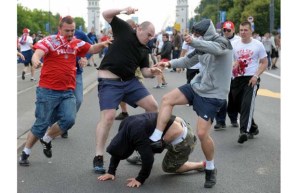 The sleepy Tyrone village of the Rock was plunged into mayhem last night when rival gangs from Pomeroy and Cookstown clashed on a rampart just off the Rockdale Road.

Cudgels, shillelaghs and wet sods of turf were said to have been employed to settle a long-standing argument over the comical merit of the award-winning sitcom Mrs Brown’s Boys.

With Pomeroy fiercely in the no-camp, they faced stiff opposition from Cookstown locals who have recently started up a Mrs Brown Appreciation Society. Some were said to have attended the pre-arranged brawl dressed in the same garb as Mrs Brown herself. Eye-witness reports state that the Pomeroy nay-sayers came out slightly on top but that analysis is sternly denied by Cookstown Mrs Brown Society chairperson Jay Sheehy:

“1-0 til us I thought. Mrs Brown is the best comedy since Jasper Carrot. Them Pomeroy ones are so serious. Like, when was the last time you went there to see a pantomime?  Their local primary school did a version of Schindler’s List for Christmas. Like for Jaysus sake. There were parents throwing up. This fighting has to stop and that will only be achieved when they lighten up a bit.”

“We fairly laid into them, boys,” claimed Fran Grimes. “I’ve seen funnier month’s minds that that shower of shite they call Mrs Brown’ Boys. I’m ashamed to be Irish so I am. It’s nearly worse than The Hole in the Wall Gang. Nearly. Seriously like, it’s Fr Ted in drag. Pre-historic lump of dung: Man with dress says ‘feck’; Drunken audience piss themselves laughing; repeat for half an hour. A friend of mine started to watch it, regretted it, couldn’t find the remote so attempted to burn his own house down. This is only the beginning too. The Glenavon and Greenvale are going to cut up rough this weekend over it. And that’s not a real audience I think. Just a pile of turkeys or something. “

Although the PSNI were aware of the arranged brawl, the decided to let the fight go ahead for ‘a bit of craic in the Rock’.