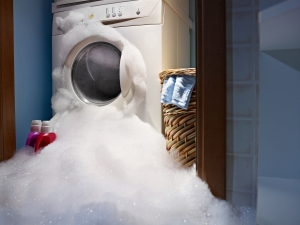 It was drinks all around this evening in the Kildress Inn after father-of-three Noel Traynor completed a full load of washing in their Hotpoint Free-Standing HY6FY155 Washing Machine. Traynor, who was left stranded for his good shirt and jeans whilst his wife enjoyed a three-day spa break in Downings, was said to be euphoric with his accomplishment and may have a ‘charge of drink’ to celebrate.

“It took some concentration. I’d seen Maura work at it before but never in a million years did I ever think I’d have to use it. I saw a box of washing power and had a fair idea it went in some sort of tray but sure when you pulled the tray out how the hell were you to know which one to put the stuff into? So I just bucked a fistful of it into all compartments and then whacked in softener and mixed them about with a spoon. To be honest I was acting on instinct at this stage.”

Things took a turn for the worst when Traynor was faced with ‘a pile of nobs’ before pressing the start button:

“Aye, there where millions of numbers and other nobs saying cotton, linen, wool, whites, delicates and then all these stupid icons like clouds and swirly circles. Just clane mad. So I took all the clothes out and checked to see what they were made for but that was a waste of time. Some had like 80% cotton. How can you just wash 80% of something? I just closed my eyes and turned all the nobs at the same time like Russian Roulette. The sweat was pouring off me.”

Although the volume of washing powder saw the whole room bubble up, Noel was this morning sporting his shining jeans and black shirt. His wife has played down his achievement:

“He’s wearing damp clothes because he didn’t want ‘to overdo it’ by using the tumble dryer. He’s a useless lump. All the children’s uniforms he threw in are shrunken and coloured black. And the utility room is still covered in bubbles. Now he’s down in that pub getting free drink bought for him like he climbed Everest. There’s even talk of a plague being erected outside our house – the first man in Kildress to successfully complete a cycle in the washing machine. Lord above.”

Traynor is in talks about releasing an autobiography.