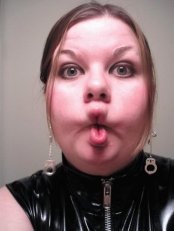 A 25-year old Ardboe woman maintains she has no regrets after spending her first two wages as a teacher on plastic surgery to look like a trout from the Lough in order to attract local men.

Mary-Ann Quinn, who also maintains a ‘wet look’ at all times, confirmed she has increased her success rate at discos in Cookstown by about 300% since the major transformation, despite serious reservations from her parents and nine brothers.

“For years I’ve had to listen to cousins talk for hours about ‘great catches’ and things like ‘jays she was deadly looking’ and stuff like that when coming home from a fishing expedition. Well I took that on board and I haven’t looked back. I courted nine men over the last three weeks, four from Ardboe, two from Ballinderry, two from Derrylaughan and an oul lad from Maghery. Money well spent I say.”

Since the operation, Quinn has looked into developing a scaly complexion as well as learning how to ‘flop about’ on the dancefloor, a new craze some are calling the ‘Moortown Mating Move’. Quinn’s mother Jacqueline admitted things have had to change around the house:

“Our Mary-Ann would have been fond of the fish suppers but since the lips changed everything has to be blended and sucked through a straw. It’s a bit of a hassle. Also, it’s very hard to make her out but I suppose young ones will always have their trends. In my day it was colourful leg warmers so I can’t talk.”

The plastic surgeon, an qualified plasterer from The Duckingstool in Brocagh, charges anything from £340 for an eely facial expression to £40’000 for full on pike.