Coalisland GP Told To Use Medical Diagnosis And Not Local Colloquialisms 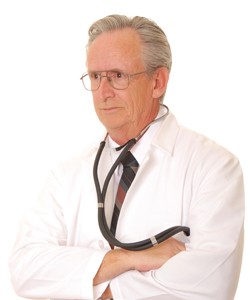 A new Coalisland doctor has been asked to refer to his medical handbook in future when identifying ailments after a complaint from three patients who claim to have not slept in a week since their recent monthly visit.

Dr McSherry, who left his job mailing letters for the Coalisland Fianna GFC to pursue his dream in the medical field, recently told 88-year old Packie McGarrell that he was ‘bollocksed now’ after listening to his heartbeat through a stethoscope. This followed an earlier visit from his wife Sadie who was complaining of a sore bottom. She told us:

“He didn’t even check me out. He just took my temperature with the back of his hand and said ‘there’s fcuk all wrong with you’ and sent me away with a packet of Lockets and a box of scented tissues. I didn’t feel reassured at all.”

Packie, who simply attended to get his traditional free cup of tea and three Rich Tea biscuits, was shocked at his diagnosis:

“He just listened to my heart with a rickety oul stethoscope. I knew myself I had deadly wind but he thought the squeaks were coming from my heart and said ‘you’re bollocksed now, Packie’. He then told me to get my house in order and settle up any old debts. I’ve hardly slept since, what with passing wind and all.”

A third complaint came from 32-year old expectant mother Helena Campbell whose check-up left her tired and emotional. Campbell, who is 7 months on, is considering changing her GP to prevent any future stress:

“He just took a look at me when I sat down and told me that the way the child was positioned meant it’s more than likely to be a ‘hateful wee brat’ and ‘likely to be in the barracks by the time he’s 14, like his da’. How dare he!”

Dr McSherry refused to officially comment on the complaints but promised to use bigger words from now on and will lose his ‘Dr McSherry – He Tells It Like It Is‘ logo outside the surgery.