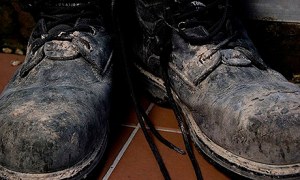 A well known metal detecting activist and part time stove-fitter is said to be in hiding after he destroyed over 300 chains of turf near his home in Drummurrer.

Terence McNeil, who can read newspapers in 32 different languages, was adamant that a rich bogland was sitting on top of some kind of metal monster, hinting at the possibility of a hidden underground world or perhaps even real gold.

His long-suffering wife, Alisha, admitted she did believe her husband was onto something:

“I heard the bleeping of the metal detector myself. It was going clean mad in that bog so he had the whole family out digging like bastes. Terence was sure it was maybe a helicopter shot down in the 70s or perhaps some kind of Celtic underworld, with the bones of leprechauns a possibility. It wasn’t until it starting bleeping in the house during the night that it finally dawned on me.”

The source of McNeil’s incessent beeping appears to be a new pair of steel toe cap boots he purchased at Cookstown market at the weekend which he has worn non-stop since.

Bog-owner Patsy Corr is currently seeking legal advice after over £300’000’s worth of turf was destroyed due to McNeil’s digging frenzy.

“That bollocks and his steel toe cap boots. When I get my hands on him, he’ll be needing his metal detector to locate my steel toe caps from his backside.”

McNeil has promised to pay the arrears and has advised his daughter that her wedding may be downgraded next year.