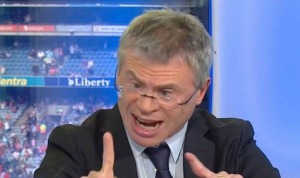 Following Joe Brolly’s assessment in April that Tyrone were ‘deteriorating very quickly‘ and that their ‘system is malfunctioning‘, wordsmiths have decided to add the verb ‘brolly’ to the dictionary to describe the act of ‘repeatedly saying something completely inaccurate to the point of hilarity‘.

Additionally, the word can also be used as a noun in some cases. An example given in the 2018 edition of the Oxford Dictionary was: ‘he’s just pulled a brolly‘ as in ‘he has just said something ridiculous that will be exposed as nonsensical in a short time span‘.

Brolly’s assessment that ‘they (Tyrone) don’t really know how to win games any more‘ was also a turning point for dictionary boffins across the water.

“We’d been toying with adding brollyisms to the dictionary for a long time now but that interview in the RTE GAA podcast was the final nail, especially when he said ‘Tyrone are deteriorating very quickly and morale is deteriorating very quickly‘ and ‘They have the players but what they don’t have is any commitment to attack. That’s been coached out of them.’ We found the last one a real brolly.”

Tyrone, who have racked up an average of 23 points per game in the championship this year, have vowed to score even more in case others accuse them of not attacking enough.

In other news, friends of Brolly are worried that his imaginary friends are now posing as current Tyrone players after he claimed two of their players are now depressed playing for the county.

Posted on June 20, 2017, in GAA and tagged Joe Brolly. Bookmark the permalink. Leave a comment.