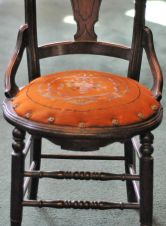 Despite comfortably holding his seat in Mid Ulster again today, Sinn Fein’s Francie Molloy had to stand all day after someone in a JCB stole his seat from his offices in Gulladuff at around 5am this morning.

Molloy, who turns 69 next week, was said to be ‘a bit sore’ after refusing to sit until his chair is returned.

Witnesses in the area claim to have spotted an man in his 70s driving a digger around the area for three hours after the election vote closed, singing hymns and psalms to a high standard.

This is petty. Francie has had that seat for years and it is well worn in the shape of himself. To steal his seat on the day he retained his seat is spiteful. All Francie wants to do is sit down on the seat and get to work.”

This is the fourth attempt and first successful mission to steal Molloy’s seat. All three previous attempts were foiled when the assailant’s version of ‘How Great Thou Art’ from a moving digger alerted the police.

Sinn Fein have offered a reward for any information on the theft up to the value of £25m in notes.