Impossible To Get Coronavirus From Collection, Says Church 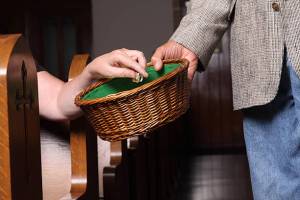 Despite the temporary banning of the shaking of hands, church officials today confirmed that God will not allow anyone to get the Coronavirus by passing the collection basket around or by handling money, especially notes.

Although the message was met with groans across the county this morning, the collection in all 43 parishes still totaled just under £90’000 for all Masses this weekend, a slight decrease on last week.

Bishop James Bogue from Trillick confirmed that the Vatican are sure God would not allow anyone to contract the illness from the basket but reminded people to use notes instead of coins as you’d never know whose hands had been on the coins:

“Yes, we had a long good prayer about the basket and came to the decision that God wouldn’t allow it. But to be on the safe side, use notes as they normally stay in wallets and all. Coins would be fiddled with in pockets and stuff.”

Clogher Parish only managed to donate £30 this week after parishioners failed to make it to Mass on time due to queues outside the Spar which was selling 100 toilet rolls for £50.

Meanwhile, a hand-washing seminar in Ardboe was cut short after no soap was produced. Locals confirmed that soap hasn’t been used in the area since the 80s, with people just washing their hands in the Lough in the morning.