← It’s Official! Every Family In Tyrone Has Received A Grant For Something
Embarrassment As Ardboe Man Accidentally Buys Own House On Internet → 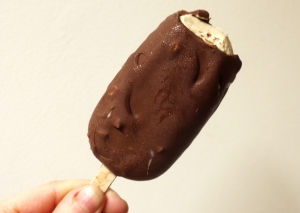 The man who walks up and down the shores of Lough Neagh selling handbags, sunglasses and mineral, despite there being no customers since 1990, has finally made a sale after Fr Fay bought a Choc-Ice for £1 yesterday evening.

Washingbay resort, which used to see thousands flock to from all over Europe to bathe in the icy eely waters, closed its doors to the public 24 years ago in preparation for the failed lignite excavations. Quinn, however, failed to give up on his sideline of selling useful goods to bathers and excited children and roamed the shore from 3pm-9pm every day since, rain, hail or dull.

“I’m ecstatic. I haven’t sold a thing since 1990 as no one comes here any more. I can’t describe the loneliness of it all. But I knew some day someone would cross my path and wasn’t it divine intervention – Fr Fay. He says he was just checking the area to make sure young ones weren’t curting in cars and hedges. I don’t give a damn what he was at – he bought a Choc-Ice. I’m retiring today.”

Fr Fay maintains this was just the start of a cleaning up of morals and standards in today’s youth in East Tyrone. From the front door of his mansion he told us:

“It’s a back to basics approach. All I see now is young ones walking about probably looking for courting and stuff wearing shorts and vests and winking. In my day I was in the bog stooling away or saying the rosary. I’ll put the romance out of them. I’ll be in the Greenvale this weekend and I’ll not hesitate to step in if I recognise one of my parishioners facing someone from another parish.”

Fr Fay added that the Choc-Ice was alright just.

← It’s Official! Every Family In Tyrone Has Received A Grant For Something
Embarrassment As Ardboe Man Accidentally Buys Own House On Internet →