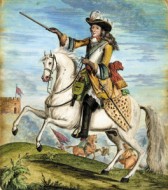 According to a renowned historian, William III (of Orange) detested marching bands and once had two whole drum corps hanged for practising at 8am on a Sunday morning.

Professor James Boyne discovered a treasure trove of archive material on the former King in a house in Holland last month whilst researching the monarch’s childhood.

Diaries and letters confirmed that William absolutely abhorred flute playing and flautists in particular, calling one flute band from Amsterdam ‘satan’s squealers from the pits of hell itself‘ in a letter to his anonymous male friend simply known as ‘squidgy face’.

He definitely hated marching bands. On one occasion he rode his horse straight through an accordion band who were practicing outside a village in Somerset, killing three triangle players. Witnesses said he was doing a mad laugh whilst it happened.

Although pipe bands seem to have escaped his wrath, Boyne discovered that he had his sights set on obliterating the Scottish Highlands Pipes and Drums Band who were marching to London for a gig. Luckily for the band, William died after falling off his horse whilst ferociously chasing a Lambeg drummer across the moors in Essex. 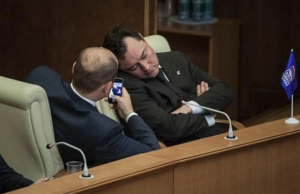 Stormont was today said to be awash with pride after four of its members, one from each of the four main political parties, graduated with BA Honours First Class in ‘Scratchin Yer Hole’ at the prestigious Belfast university, Queen’s.

The new degree, which offers modules in ‘Looking Interested But Really Completely Zoned Out‘ and ‘Seemingly Talking Intelligently About Nonsense‘ initially had over 20 students at the start of the year, with 15 dropping out after two months due to their inability to keep up with the the MLA’s expertise in the area.

“I’ll never have a cohort like it. Two of the MLAs even managed the triple whammy of  finding a way to take money off thousands of nurses and teachers, pay themselves more and scratch their holes all at the same time. It was quite remarkable. Next year they’ve even agreed to teach how they did it to a new batch of undergraduates. They’ll go far.”

All four graduates have shown interest in furthering their educational journey by taking a Masters in the subject which will include studying ‘Falling Asleep Undetected In Front Of TV Cameras‘ and ‘Hiding In Your Office‘.

The only non-MLA to graduate was a PE teacher.

Two Derrylaughan brothers, Kenny and Kieran McAliskey, were said to be a bit annoyed after they were mistaken for two whales which sparked an international environmental storm. Both have since signed up for Slimming World in Dungannon.

The global incident was first reported after dog-walker Malachy Hamill spotted the two carcasses on the shoreline at 10am down by the Washingbay, a former continental sunbathing resort. Hamill, who claims to have 20/20 vision despite his 77 years, immediately phoned the parish priest, Irish News and BBC NI with his findings before heading home to find his binoculars.

“I was afeard of approaching them in case they got angry. But they definitely looked like two hefty whales with blubber wobbling all over the place.”

Fr McKinstry was on the scene within minutes and began a rosary with 15 women who follow his car about, ‘for the safe return to America or wherever the beasts came from’ according to chief prayer Lisa Mullan. Mullan added:

“Then all of a sudden the whales got up and rubbed themselves with towels and got into the car. We thought it was a miracle and a rake of the women fainted. It was only after Kenny wound down the window as he passed by and called us a bunch of praying perverts that the penny dropped. I’m not sure what happened here but it might be a miracle. Fr McKinstry is building a whale grotto just in case the Vatican gives it the nod.”

“If there’s anything that will encourage you to lose weight it’s being reported by Wendy Austin on BBC Radio Ulster as resembling a whale. I sort of got my eyes opened there. We ate a lot of Chineses lately.”

Meanwhile Lough Neagh Rescue Centre have confirmed that it’s impossible for a whale to come up the Bann to the Lough.

Despite being ‘laughed out of it’ during the infant weeks of his new business venture ‘iPigs’, Urney entrepreneur Joe McCafferty has turned the sleepy townland of Urney into Europe’s most affluent area after Paris in under a year.

Such is the reputation of the West Tyrone hinterland, high earners in Hollywood and Russian cosmonauts are considering buying a second home in the area.

McCafferty, despondent at the the chronic effect the never-ending recession has had on his homeplace, took a gamble and opened a pig-renting shop iPig. Despite being told that his idea was “a load of shit” by struggling local shop owners, Joe persisted and is now the wealthiest man in Ireland after Michael Lyster and Gay Byrne.

“I just thought the country was couped and had a lock of pigs floating about the back yard. I cleaned them up and started Joe’s iPigs and didn’t people start renting pigs. I’ve no idea why. I just suppose folk were so broke they thought somehow owning a pig for a week might make them happy. Anyone with a pig on a leash seemed to be without a care in the world.

Since word got out, over 400 pigs from iPigs were rented out for an average of 3 days with customers are young as 4.

“I think they then became a fashion accessory amongst youngsters so word got out on Twitter that the next big thing was to have a rented pig. I then started selling iPig pig clothes as accessories. They were like hot cakes. Within three months I’d made £3.5m I think. Another lad tried opening a rival pig-renting shop was Micropig at the other end of the street but I threatened him and then bought him off. To those who said I was mad – up yours, ye dicks.”

McCafferty has pumped much of his takings back into the townland and has built a massage parlour and a castle, opened a Harrods, Top Man, Prada, Georgio Armani and a Chanel shop.

Someone looking like Keira Knightly was reportedly seen down near Clady looking at houses whilst Nigella Lawson loosely talked about opening a cafe in the main street.

Joe’s iPig pigs can be rented for £5 a day for a maximum of two weeks.

Hugh had a soft spot for Keady

A Tattyreagh historian, Thaddy Horridge, has claimed that Hugh O’Neill (also known as The Great O’Neill) had a bit of a notion for Armagh and even liked Derry people ‘a bit’.

This revelation has come as an enormous shock to O’Neills in the county as well as the majority of the county’s natives from all clans, with the Donnellys and O’Hagans suggesting he should be stripped of his lofty title as one of the greatest leaders the country has ever seen. Horridge revealed he possesses secret documents supposedly written by Hugh which details a weekend away he had in Keady as well as a meeting he had with a boy from Swatragh.

“It’s obvious from the correspondence I have in my possession that Hugh wasn’t the wholesome Tyrone man he has been made out to be. In one letter he says he headed off to Keady for a weekend with the wife of Turloch O’Hagan. They checked in to a shed-come-hotel in the outskirts of the town and was immediately taken by the beauty of the river Callan and its plentiful trout. I was shocked to read this as I’ve never hear one Tyrone man say anything nice about Armagh at all. It gets worse.”

Horridge details a meeting O’Neill had with a boy Tohill from Swatragh, who was tending to his bull and six cattle, on a journey to Coleraine for some buttermilk.

“O’Neill was quite impressed with the athleticism of Tohill and it is claimed he pleaded with the Swatragh farmer to join his forces where he would he anointed an O’Neill within hours. Tohill rejected the offer, saying he’d rather cut his own balls off than move to Tyrone. Hugh was again impressed with the man mountain’s directness and it was with a heavy heart he had him slaughtered.”

The Donnelly clan leader, Fergus Donnelly of Derrylaughan, says this shows that O’Neill had ‘a bit of a dubious side to him’ and maybe wasn’t ‘the big Tyrone man he said he was’, claiming all Donnellys don’t eat apples as it reminds them of Armagh and that they still use Derry men as slaves.

Although daily sitings of a UFO in the greater Stewartstown area have diminished slightly since the weekend, the local Community Watch Committee remain vigilant over the whereabouts of the mysterious alien motor. Word first spread that there was some kind of vehicle in the sky soon after service at  St Patrick Church of Ireland. Terence Bunn claims he was the first to spot the vehicle:

“I was thinking about what the good vicar had said about abstinence during his sermon and found myself staring into the sky contemplating drinking less on Tuesdays, Thursdays and Sundays when all of a sudden I saw this unmistakeable disc-shaped object swirling gently in the breeze over the Stewartstown Credit Union. I almost collapsed in shock. No one came to my aid as they automatically thought I’d been drinking again, which admittedly I had been. It was only when I pointed to it that others became aware of the UFO. I hope that when the movie is made that someone like James Nesbitt or Clint Eastwood plays me.”

Before long, everyone in Stewartstown emptied out onto the main street (population approx. 1400) to stare at the moving object. Explanations ranged from a very fat moth to a hubcap. Within 24 hours, over half a million people descended on Stewartstown with the local pubs, shops and hostelries experiencing a roaring trade, unprecedented in the town’s history. They have since declared to be the richest town in Ireland with Fergal Logan as their first Lord Mayor.

One woman did come forward with an explanation. Frances Graham claimed her hat flew off her outside the church and that she’s 100% certain it’s hers as it was round, green with a red rosette on it – just like the UFO. She has since gone missing and her house graffitied with, “Do Ye Want To Be Called Tin Town Again, Ye Hoor”

Tyrone Tribulations would like to offer their heartfelt condolences to the family of Brian Og Maguire at this extremely sad time. Our thoughts and prayers are with them.