DUP Man Suspended After Mobile Footage Shows Him Tapping His Foot To Ireland’s Eurovision Entry, On A Sunday 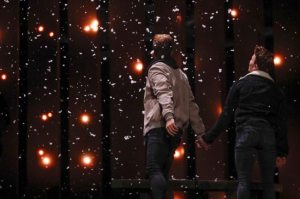 A junior DUP party member from Cookstown, who hasn’t been at his desk for over a week, has finally revealed that he has been disciplined after mobile phone footage showed him tapping his foot and smirking to Ireland’s Eurovision song which celebrated same-sex relationships, on a Sunday.

Wilbert McFettridge (22) claims he hasn’t been told which aspect of his party’s principles he had violated but has vowed to be a better DUP man in the future:

McFetridge wanted to confirm to his supporters and voters that he has spent the last week listening to the Moygashel Loyalist Flute Band Greatest Hits CD non-stop in his car even since his lapse and will be more aware of his musical preferences in future:

“To be honest I wasn’t aware of anyone filming me. I just happened to be listening to it whilst waiting in traffic to get into the Cookstown Fr Rock’s game against Greencastle. Damn it, I mean Sunday Service,”

The DUP now are currently monitoring CCTV footage of cars arriving at the Cookstown GAA ground that Sunday. If spotted, McFetridge could be up on all four accounts of breaching party ethos.