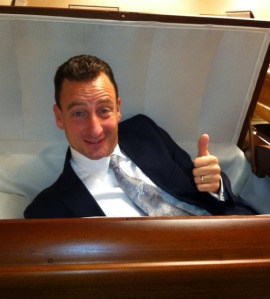 Worried Coalisland residents have signed and handed in a petition to local undertaker Padjoe Dorman, demanding that he maintain a consistent facial expression whilst out and about in the town.

Dorman, who claims he has absolutely no special ability to predict when old people will expire, has been accused of worrying hundreds of pensioners since he expanded his business last month by adding on an extension at the back of his premises. 77-year old retired wrestler Kenny Campbell from Annagher told us of his ordeal:

“I met Dorman outside the butchers on Christmas Eve and he winked at me with a smirk on his face. Then he says ‘I hope ye get time to ate that ok’. He’s trying to scare us into the grave. Some operator.”

81 year old Mary McAleer from Newtownkelly added to the catalogue of complaints:

“That man has me tortured. At the local nativity play in the Primate Dixon school he kept looking over at me and sizing me up and down, like as if he was measuring me. Then he nodded at me and closed his eyes really slowly. I’m not imagining it. I didn’t sleep for days after it and had to get nerve tablets. To be honest I’m still not well.”

Dorman has denied any accusations of skulduggery:

“I’m just a friendly fellow. I’m an ‘Island man to the core and I love my people, alive or dead. And to show no ill feeling towards those on the petition, if any of them die within the next five years, I’ll throw in a free embalming session. Now, you can’t get much better than that.”

Dorman also added he has opened an off-licence at the back of his premises.