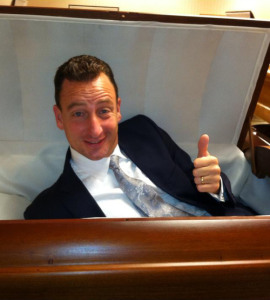 Worried Coalisland residents have signed and handed in a petition to local undertaker Padjoe Dorman, demanding that he maintain a consistent facial expression whilst out and about in the town.

Dorman, who claims he has absolutely no special ability to predict when old people will expire, has been accused of worrying hundreds of pensioners since he expanded his business last month by adding on an extension at the back of his premises. 77-year old retired wrestler Kenny Campbell from Annagher told us of his ordeal:

“I met Dorman outside the butchers on Christmas Eve and he winked at me with a smirk on his face. Then he says ‘I hope ye get time to ate that ok’. He’s trying to scare us into the grave. Some operator.”

81 year old Mary McAleer from Newtownkelly added to the catalogue of complaints:

“That man has me tortured. At…