Residents across Tyrone last night were prompted into getting heavy coats out and putting them onto beds as the temperature plummeted to as low as minus 4 degrees Centigrade in some parts of the County.

Donkey jackets, duffle coats, boiler suits, dressing gowns, overcoats, monkey hats and other outerwear were all hurriedly thrown onto beds, as faulty electric blankets were dug out of attics and hastily re-wired.

“Jays, it was baltic. I don’t know how many blankets and coats we had on the bed but I could have survived a gunshot. You’ve no idea how cold this house is. I went out to the sales this morning and bought 14 more duffle coats for the beds. My husband told me to sit by the fire, but there’s not much point in that unless he’s going to light the feckin’ thing. Tight-fisted eejit”.

“I knew we were going to be in trouble when I was in Greencastle last night to get some wheaten, and the young lasses were out in what they call their ‘overcoats’. Or to give it its proper name, glitter spray”.

Others were faced with the prospect of having to have the central heating on all day.

“Have you seen the price of oil?” complained a man from Trillick, who preferred to remain anonymous. “We’re racing through the stuff. Christ, it was only the end of November since I siphoned 500 gallons of it from them ‘uns down the road. Now I’m going to have to do it all over again. It’s beyond a joke, it really is”.

“The roads are like a bottle. People shouldn’t be out driving in this weather, and if they are they need to act responsibly. We were in Tesco car park last night trying to doing doughnuts in the panda car and it was almost impossible. Car was sliding all over the place. People should stay in”.

It has also been reported that 44 youngsters have been clipped around the ear over the holidays for leaving the immersion on for more than three hours after the water was used. 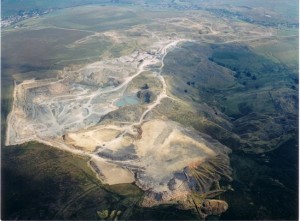 Tyrone Tourism Officer Candy McClean has urged his office to drop the ‘Amongst The Bushes’ county slogan after a leaked document from Dublin revealed plans to immediately quarry the whole of Tyrone as soon as they have the authority to do so. The controversial plans, code-named ‘Dig Her Up 2016’, will see the entire population of Tyrone relocated to Fermanagh, Armagh, Donegal and Monaghan. Dissenters will be threatened with a move to Derry.

“Aye, it’s a bit of a disaster alright. Like, what do they expect to find in the east of the county? That’s just swampland. We’ll have to change our famous slogan as there’ll be no bushes at all in the new Tyrone. Maybe ‘Tyrone – It’s a Great Big Hole’. I used to be all on for a United Ireland til I heard this. Them Dublin ones are ruthless.”

Not all locals were completely against the potential digging session. Harry Askew from Eskra remained unfazed by the plans:

“My message to the rest of the county is dry yer eyes. Up here in Eskra they’ve been quarrying the dung outta us for years and sure we still won the Intermediate Championship. It’s been like this for us as well as Carrickmore, Drumnakilly, Mountfield, Greencastle, Mullaslin, Altamuskin and Altcloughfin for as long as we can remember. You get used to the vibration, dust, stoor, drilling sounds and all after a while.”

Askew denied that he was turning a blind eye to the mass upheaval because he owns the world’s largest quarrying equipment business.

Quarrying is expected to begin within days of a political handover. Senior Unionist politicians have privately admitted they’d reconsider their allegiance to the crown if it meant Tyrone and, in particularly McElduff, were totally excavated.

‘What’s On’ Guide For This Evening On Tribulations TV

To access, press the red button on your fax machine or go to channel 1 on any Sinclair ZX81 and type in ‘Run’.

A collection of Tribulations TV children’s programmes that have shaped the lives of Tyrone’s youngsters over the years, including Captain Pugwashingbay, Bill and Benburb, Tom and J’Erigal, and countless others. Contains swearing.

Presented by Malachy Mullan, local lady’s man and owner of the Donaghmore slaughterhouse, this week’s episode in self-betterment teaches aspiring young gentleman how to cough up balls of phlegm into your bare hand and then discretely wipe it on your trousers, and a valuable lesson in showing impressive restraint to a lady in a fancy Dungannon restaurant by not punching the waiter in the face when presented with the bill.

Diarmid-Boy and Eugene drive about in a Reliant Robin that’s got ‘Paris London and Pomeroy’ painted on the side, and then fall through the bar in Hagan’s in Dungannon.

Two wives, probably from Cabragh, dive face-down into a bog and get rescued by their husbands both of whom are in the advanced stages of inebriation, who then have a heated argument about which wife is which.

Yer man gets lucky yet again with a nice piece from the Moy after a session in Tomney’s, and then gets to take her home in a fancy white sports car. Underwater.

A fascinating insight into what it was like living in County Tyrone in the 1920s with no electricity, fresh running water, or modern vehicles, by using footage filmed in Stewartstown last week.

Drama about an Aughnacloy farmer who witnesses a bale of hay being stolen to order by an East European hay stealing ring, who is then drawn into the deadly underworld of black market hay espionage, armed with nothing but a big piece of blue rope.

A man in an odd-looking mask wanders round Ardboe near the Battery Harbour shouting “ghost oh biys” to strangers.

You won’t see one of these in Loughmacrory

For the 95th consecutive year, there will be no MBEs, OBEs or Knighthoods in Loughmacrory after the list was leaked tonight at the Loughmacrory Pioneers’ Dance and Quiz in the community hall.

Initial reports suggest an air of apathy and resignation greeted the news. However, noises since have alerted the security forces with the intimation that there may be riots and road blockages over the next few days and possibly weeks.

The news comes as a massive blow to town gardeners Harriot McVeigh and Francey McNally who were confident that their maintenance of the village daffodil bed had landed them some sort of recognition this year. McNally, 61, was furious:

“That oul fcukin bitch. She sees fit to give a knighthood to Stephen Hawking or make Judi Dench a dame. Well, let me tell you this. I’ve had my fair share of dames over the years but none are a patch on Harriot. She gets up at 9 every Saturday morning and then maintains the daffodil patch in the afternoon. Are you telling me that word hasn’t got back to Buckingham Palace about the Loughmacrory daffodil display? That oul hag has spy cameras all over the place. She knows rightly and is sticking two fingers up to Loughmacrory just as her father did. It’s time to act.”

Word has filtered out tonight that the Loughmacrory Gardeners’ Society will be blocking the Ballybrack Road tomorrow and maybe the Skeboy Road on Monday if it’s a decent day. McNally summed up the mood:

“To be honest we wouldn’t be accepting the award anyway on principle but that’s not the point. Loughmacrory has been ignored when it came to the European Championships, the G17 meeting, the Eurovision as well as being turned down for a grant to build a memorial to those caught laundering. We’re not taking it any more. Before the year is out, Loughmacrory will make the Sky News. Even if I have to run to Mountfield naked.”

McAleese after a session with the wife

A group of European scientists have confirmed that people from Loughmacrory live longer and are also more rampant at night. This revelation came as no surprise to the locals who have kept their longevity and virility a secret for fear of outsiders inter-breeding with them and damaging their golden gene pool. The report also suggested that those who lived on farms in Loughmacrory were particularly romantic at all times in the day. Retired headmaster, Hugh McAleese, admitted that although he was happy to see their name on the world map, he was also wary of boys from Omagh, Tattyreagh or America attempting to attract their girls such was their new-found reputation.

“We’ve known this for years. I’m 121 and have no signs of wear and tear. The average age here is about 76. My father had no record of birth but he reckoned he was over 150 by the time he succumbed to a hunting accident. Although there were only 14 in our family he was said to have fathered 60-odd around the country. He was a farmer and there seems to be a correlation between farming and copulation. Them farming girls would be running around buck naked after lads all time of the day. I think it’s the smell of silage and the noises from the livestock. By all accounts, my da was as randy as they come,” McAleese said before offering a seductive wink.

McAleese put forward his theory that because most farming house had no upstairs, it left the farmers with more energy at night not having to climb a flight of 12 steps or so like those houses in Mountfield or Creggan.

“Speaking from personal experience, I went from a three-story house in Drumnakilly to a small farming bungalow at home after I inherited my father’s farm. The wife saw some change in me. I’d come in at six, slap the dinner into me and sure most of the time we just lay down on the spot. We didn’t know whether we were coming or going with all the antics we’d be at. Long healthy lifestyle, endless horizontal dancing – we’ve the life of it in Loughmacrory. C’mere and give us a kiss ye wee cat.”

The Northern Ireland Tourist Board are looking into the potential of a tourism hotspot for stag and hen nights but are sure to meet resistance in the village. In 1996, a similar attempt to tap into the area’s mysticism saw a government official stripped and superglued to a gable wall outside the pub.