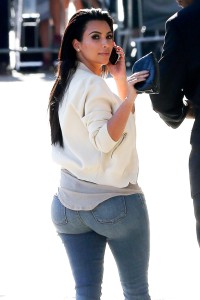 Strabane Lord Mayor Bill Johnson confirmed this morning that he has secured a big-name signing to launch the town’s weekend 10k run in an attempt to make up for last year’s debacle which saw a drunken ex-Tellytubby shoot himself in the foot.

Demanding a much bigger celebrity this year, at a hastily-arranged press conference the crowd in attendance were amazed to hear that Kim Kadashian’s backside has agreed to pull the trigger for 2014. Within an hour 600 tickets were already sold including most men’s sporting clubs from the hockey society to the local cricket association.

“It was touch and go for a while. Kim already had a road bowls tournament to attend in South Armagh that same day but she did agree to lend us her arse for the occasion. It’s a mighty coup (and hoop) and I assured Kim that her derrière will be treated like royalty when it arrives on Tyrone soil.”

The fee, estimated to be in and around £50, will secure her posterior for two other gigs in the area that day including opening a new branch of Quinn’s Funeral Services and drawing the balls for the Pensioners’ Weekend Bingo.

Retired kite-maker Lionel Kildare admitted he had never looked forward to the run until today’s news. Licking his lips and smirking, he explained:

“Bloody fantastic. I’m a big fan of Kardashian’s buttocks, especially for their charitable works. I just hope the old blood pressure behaves itself.”

Kim’s rear end will pull the trigger this Sunday at 17:00 hrs.

Meanwhile, a local women’s group have promised to picket the event under the slogan “What’s wrong with our arses?”