← Massive Wall To Be Built Around Garvaghey Complex To Combat Global Warming
Fears For New Docu-Soap To Hit TV Screens Next Month: ‘The Only Way Is Eglish’ → 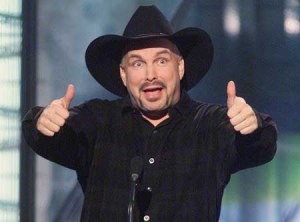 Following the news that Garth Brooks has sold out for a fifth night in Ireland this summer, the Vatican have sent a stark warning to Brooks’ PR team that they will take a dim view of any more concerts, which threatens to break the Pope’s record of a 3 million audience in 1979.

Brooks will play to almost half a million fans in July and music experts reckons he could sell out 10 times that if he really wanted to, although today’s statement from Pope Francis has put an end to that idea promptly. A Vatican insider, nicknamed Fr Hurson from Edendork Co Tyrone, told us:

“Yes, we take great pride in the 3 million Pope John Paul II pulled in in 1979. If Brooks thinks he can ride in on his stetson and top that then he’s deluded. Just in case he is a Catholic, we will excommunicate him if he has any more concerts. We have friends in high places, Brooks.”

“Like, he’s being a bit of a dick about this. JPII pulled in 300’000 in Galway alone. Let’s see Brooks do that on a cold windy day in Tuam. Some chance. That day, tomorrow or not, will never come. Pope Francis is ripping about this.”

Meanwhile, Derrytresk GAA are confident they can secure the presence of Brooks for the opening of their third Guinness pump in the bar during his stay in the country. Club secretary Hughie Hanna is cocksure of his services:

“We emailed him last week and asked would he come to the Hill for the unveiling of the third Guinness pump in the clubrooms. He hasn’t replied but as my ma used to say ‘no news is good news’ so we’re fairly sure he’ll do it. He’ll get sandwiches and mineral and maybe he’ll hum us a tune or two.”

← Massive Wall To Be Built Around Garvaghey Complex To Combat Global Warming
Fears For New Docu-Soap To Hit TV Screens Next Month: ‘The Only Way Is Eglish’ →