Fears For New Docu-Soap To Hit TV Screens Next Month: ‘The Only Way Is Eglish’ 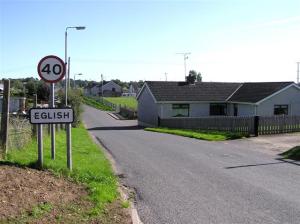 The release of a new Tyrone-based TV programme may be put on hold after producers declared the show ‘untransmittable’.

‘The Only Way Is Eglish’, was intended to be a ‘scripted reality’ docu-soap that told the story of six twenty-somethings living the high life together in the popular and bustling Dungannon suburb of Eglish.

However, a number of ‘insurmountable differences’, including cast members walking out, have put the series in jeopardy.

“We were sold a pup”, declared furious TV producer Tarquin Ramirez from England. “We were told that Eglish people lived in the high-class part of Tyrone, like Chelsea in London, except posher. Turns out they’re nothing of the sort. The communication barrier’s impossible. We tried putting sub-titles onto the screen for the English and the hard-of-thinking, but to honest we’re none the wiser”.

Researchers spent three hours last Sunday trying to translate the phrase, ‘Thon bale o’ hay’s couped, ye clift. Get it red up. It’s banjaxed’, believing it to be an obscure form of Irish dialect, whilst one of the cast members stormed out after refusing to stop licking his plate during mealtimes.

“We had hoped to broadcast TOWIE with them chatting about stuff like Belfast, life, relationships and partying”, complained Ramirez. “Instead we filmed them last night talking about the best way to siphon diesel out a car in the pitch black without it getting on your dungarees. For two hours. Solid. And that was just the girls. It’s not going well. And they seem to be calling us all sorts of unpronounceable names, and I’ve no idea whether they’re compliments or otherwise. The language barrier’s a nightmare. What’s a ‘fecking hallion’? Any idea?”

Series consultant and local man-on-the-ground Gerard Donnelly from Dungannon, who was responsible for luring the bright lights of London to Eglish, admitted,

“Between me and you, I told the cast to act up a bit fancy for the auditions, you know, a bit la-di-da. Wee Hugh McNeice even bought himself a new pair of clogs. But I know there’s been problems. I had high hopes for wee ‘Shagger’ Devine, who’s only 21 but loves partying and fighting and going out and getting slaughtered. That would make for lively TV. But to be honest, I don’t think she was very happy with the nickname and refused to be filmed. I don’t know why”.

It is understood that Ramirez is privately drawing up a contingency plan to adapt the footage for an entirely different television concept, entitled, ‘Zombies Say The Funniest Things’.