← Stormont In Disarray As McElduff Starts Swinging At Nesbitt Over HP Sauce. Maskey On High Alert.
Clonoe Church Choir Told To Stop Singing In Their Accents By Parish Priest → 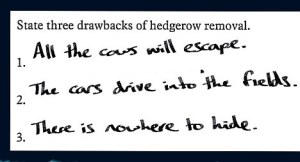 Cappagh Grammar School have reassured parents that their children can resit their GCSE Geography after all 33 pupils failed to achieve higher than a U this year. Early reports suggest a major problem with the Geography teacher’s knowledge of the planet outside of Tyrone, with one pupil complaining that her teacher told them Russia didn’t exist and that Drum Manor forest park in Cookstown was a real Irish rainforest full of South American tribes.

Mr Kelly, who has been teaching at Cappagh Grammar since 1999, also admitted to believing Europe and Asia etc were called ‘incontinents’ and that mountains were man-made by Egyptians.

“We’d warned the school about Mr Kelly. Sure he told us back in 2002 that rain was formed by the Chinese and that the earth has 4 moons – the quarter, half, 3/4 and full ones – going around it. The penny dropped after we left school and bit by bit found out that everything he taught us was wrong. For me, it was when I found out that lap dancers don’t come from Lapland.”

Another past pupil, Kenny Willson, remembered:

“When we were studying oceans he told us that there was no such thing as tides and that people were just walking closer to it or further away and couldn’t remember where it was the last time. We never questioned him. When he said that Russia also didn’t exist we should have worked out he was a fraud. But he was very convincing. He said Russia was like Narnia and made up by the Americans.”

Cappagh Grammar are to fund the resits of GCSE Geography and have reassured students that the Sperrins are not a collection of simmering super-volcanoes ready to blow, as they were previously instructed.

← Stormont In Disarray As McElduff Starts Swinging At Nesbitt Over HP Sauce. Maskey On High Alert.
Clonoe Church Choir Told To Stop Singing In Their Accents By Parish Priest →