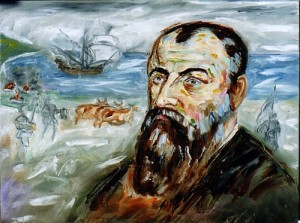 Hugh had a soft spot for Keady

A Tattyreagh historian, Thaddy Horridge, has claimed that Hugh O’Neill (also known as The Great O’Neill) had a bit of a notion for Armagh and even liked Derry people ‘a bit’.

This revelation has come as an enormous shock to O’Neills in the county as well as the majority of the county’s natives from all clans, with the Donnellys and O’Hagans suggesting he should be stripped of his lofty title as one of the greatest leaders the country has ever seen. Horridge revealed he possesses secret documents supposedly written by Hugh which details a weekend away he had in Keady as well as a meeting he had with a boy from Swatragh.

“It’s obvious from the correspondence I have in my possession that Hugh wasn’t the wholesome Tyrone man he has been made out to be. In one letter he says he headed off to Keady for a weekend with the wife of Turloch O’Hagan. They checked in to a shed-come-hotel in the outskirts of the town and was immediately taken by the beauty of the river Callan and its plentiful trout. I was shocked to read this as I’ve never hear one Tyrone man say anything nice about Armagh at all. It gets worse.”

Horridge details a meeting O’Neill had with a boy Tohill from Swatragh, who was tending to his bull and six cattle, on a journey to Coleraine for some buttermilk.

“O’Neill was quite impressed with the athleticism of Tohill and it is claimed he pleaded with the Swatragh farmer to join his forces where he would he anointed an O’Neill within hours. Tohill rejected the offer, saying he’d rather cut his own balls off than move to Tyrone. Hugh was again impressed with the man mountain’s directness and it was with a heavy heart he had him slaughtered.”

The Donnelly clan leader, Fergus Donnelly of Derrylaughan, says this shows that O’Neill had ‘a bit of a dubious side to him’ and maybe wasn’t ‘the big Tyrone man he said he was’, claiming all Donnellys don’t eat apples as it reminds them of Armagh and that they still use Derry men as slaves.

Posted on November 16, 2012, in Uncategorized and tagged hugh o'neill. Bookmark the permalink. 3 Comments.