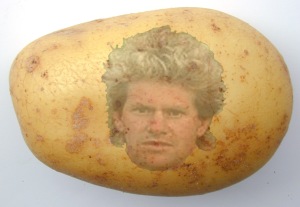 The gruesome townland of Galbally was rocked yesterday when local girl, Maisie McGarrell, fell to her knees outside the Vivo after she spotted the face of 1980s Blonde Adonis Plunkett Donaghy on a potato.

Having innocently felt the weight of several bags of Kerr’s Pinks in preparation for feeding her extended family of 32, McGarrell let out an unmerciful scream, yelling “sweet mother of Jaysus, isn’t it Plunkett” and fell to the ground in convulsions.

“I thought she’d been robbed again”, said the shopkeeper from Pakistan, “She’s an awful hoor for leavin her purse on the counter besides the Kerr’s”.

The Parish Priest, Fr Dinsmore, arrived at the scene soon after and demanded that Mr Ahmed clear out all his stock and replace it with moving statues of Plunkett Donaghy, candles and rosary beads. It was soon pointed out to Fr Dinsmore that Donaghy was, in fact, still alive and wreaking havoc around the Moy every weekend. They decided to go ahead with the shrine as Galbally was ‘a brave lock a miles from the Moy anyway’.