← Windmill GFC Offer Moyes A Quick Return To Management
Slimline Darren Clarke To Shorten His Name To A Symbol; Others To Follow Suit → 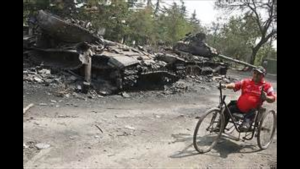 In a move that United States Congress are treating as ‘hostile’, Mayor of Coalisland Mickey ‘Shagger’ Lambe has sent a sobering message to Western forces that they can “cry me a river” over the mounting tensions in the Ukraine and insisting they should “stay out of it, and stick til worryin’ about Coca Cola an big Macs”.

Lambe maintained that Tyrone men have been “out and about, gettin’ on tara well with the oul communists over thundar” since before the second world war.

“East Tyrone and Eastern Bloc. Sure why do you think there is a canal in the ‘Island?” he quipped, “And don’t give me any of that Corn Mill shite…”

Mr Lambe shockingly revealed that his grandfather, Marty ‘Docket’ Lambe *, has original engineers’ survey data and the blue prints of the modern canal which runs from Coalisland to nearby lough Neagh.

‘Docket’* is said to have travelled most of modern day Moscow, Georgia, and Serbia, where he chaired several meetings with senior communists who were promising copious amounts of Eastern oil and vodka, in return for local Coalisland household coal and O Neills sportswear, all to be transported via the canal.

In a contact valid to this day, Coalisland still receives an undisclosed amount of cheap vodka and home heating oil despite not having sent any coal out since 1953, with the last Tyrone Jersey leaving for Georgia in early 2008. This week’s revelation is being blamed for the increased police and diesel dippers presence in the town recently.

“If America thinks its gonna feck this up for us, they have annarr thing coming till them. I’ll go over there and challenge Obama the very best” he said, adding finally “shut thon gate after yez, that bull’s a randy hoor.”

* Lambe’s grandfather Marty ‘Docket’, famed for scoring three penalties in the closing stages of the ’38 minor final for Na Fianna, was controversially embroiled in and then later cleared of Tyrone’s first ever match fixing scandal. He was accused of being in cahoots with the Derrylaughan keeper ‘Tiddley’ Donnolly, who blames leaving his glasses in the changing rooms at half time for the late hat trick of concessions to his net. ‘Docket’ remains the only Tyrone man to win the Vladivar senior ‘Player of the Year’ 7 times, despite only ever playing 6 seasons of football in the blue and white.

← Windmill GFC Offer Moyes A Quick Return To Management
Slimline Darren Clarke To Shorten His Name To A Symbol; Others To Follow Suit →