Cookstown Politician Comes Out As A Vegetarian 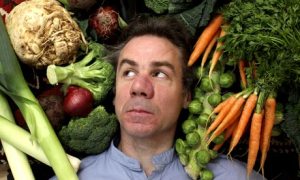 A Cookstown Councillor has today bravely announced to his constituency and beyond that he’s a full-blown vegetarian.

Brian Sheehy admitted his decision to come forward was inspired by recent politicians who have announced their own personal preferences on a range of issues from their favourite colour to sexuality.

Sheehy, fighting back the tears at a hastily-arranged press conference outside Margaritas Restaurant Wine and Cocktail Bar in sub-zero conditions, told us:

“I have to do this to kill the rumour-circuit concerning my dietary habits. Yes, it’s true – I’m a rampant vegetarian. I haven’t let a steak near my gob since 2003. Judge me if you want but I have faith in the Cookstown people that they won’t turn their backs on me just because I’m into lettuce and tomatoes.”

The scale of Sheehy’s predicament was brought home during the interview when a passing Ford Fiesta slowed down enough for a man to stick his head out and shout ‘go on ye big cauliflowerhead, suck a carrot’ in a strong East Tyrone accent.

“If I lose votes on this, so be it. I can’t help it if I prefer a cucumber to a couple of tuna baps.”

The councillor added that he is most certainly not a vegan as he likes a glass of milk before bed and sometimes wears mink fur coats to church.

“That bollocks can go and shite. If a man turns down a ham shank in favour of a few tomatoes is not to be trusted with things like fixing roads and getting the broadband in.”

Other vegetarians are expected to come out from the shadows after this news.