Deceased Strabane Man Fined £60 For Speeding On Way To Funeral 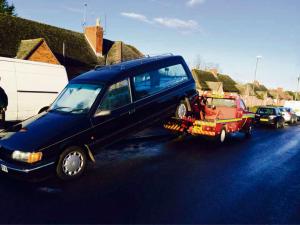 A deceased 71-year old former funeral director from Strabane has been fined a posthumous £60 and warned about future conduct after the hearse he was resting in was caught doing 44mph in a residential 30mph zone in the town last night.

Jeremiah Pauncefoot, who passed away on Monday after a short illness, was making his way to his final resting place in a top-of-the-range solid panelled oak coffin when the hearse he had previously owned was flagged down by a PSNI officer on the Clady Road.

The young driver, who had just started work experience at the Pauncefoot Funeral Service, used his dead boss’s licence when asked for ID before finishing the journey and jumping on a boat to England.

Defendant for the deceased Fergie Logie admitted he was annoyed at the judge’s decision:

“Pauncefoot may have been a miserable funeral director when he was alive but one thing he definitely wasn’t was a speedster. That young trainee should be forking out the fine, whoever he was. Fortunately Jeremiah had a jar full of money in his office which was always suspected to be bribes he took from independent bereavement counselling companies in exchange for the addresses of the recently deceased. That’ll cover the fine and my fees.”

West Tyrone PSNI spokesman Rory Gilgull has warned undertakers across the county to be on their guard as this is just the start of a clamp-down on funeral directors who think they’re above the law.

“Undertakers are a menace on our roads and we’re prepared to take them on. Their intimidation of other road users has to stop. Last week a petrified pensioner was shouted at in her Micra by an undertaker who bellowed ‘move over old lady or you’re next‘ and winked whilst pointing to the back of the hearse. They’re ruthless and they park all over graveyards.”

Jeremiah Pauncefoot’s business has been bought over by his son, Darkness.