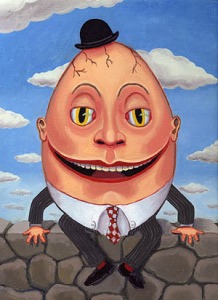 Parents at a primary school in Omagh are said to be livid after over a dozen nursery rhymes were outlawed at the weekend on advice from the school’s new Health and Safety Officer Hetty McCambridge from the Education Board.

St Kent’s in the town placed some of the most well known songs at the top of the danger-list including Rock-A-Bye Baby, Humpty Dumpty, Jack and Jill as well as Georgie Porgie. Children heard reciting the well-known lines will be suspended for at least a week pending an interview with their parents or legal guardians.

“Rock (or Hush)-A-Bye Baby is one of the most horrific and nauseating stories I’ve ever read. Personally, I recall having nightmares of being placed at the top of a tree and ultimately hurtling towards terra firma in my cradle at the speed of light. What sick parent would tell their little darling that scenario?”

Humpty Dumpty has also been outlawed after fears children will begin pushing rotund classmates off walls hoping a royal army will arrive, or maybe just for a laugh. It has been banned under the category of ‘dangerous subtext’ as well as worries over the medical proficiency of these handpicked molly-cuddled soldiers.

The reasons for the banning of Georgie Porgie was less clear with McCambridge maintaining he was either homophobic or a nymphomaniac:

“This rhyme is promoting the kissing of random girls which can be very dangerous around here. The girls would do more than just cry. Also, the reason for running away when ‘the boys’ came out ‘to play’ seems a bit vague and may hint at Georgie running away from a group of boys playing due to some form of inherent prejudice. Anyway it’s not the sort of values we at St Kent’s want to condone.”

St Kent’s are also looking into ‘It’s Raining, It’s Pouring’ and its promotion of going to bed inebriated.