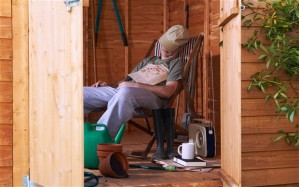 A Fintona hedge expert is said to be holding up well in his 8×6 Apex overlap dip-treated shed after spending a third night locked out of his house.

Francie Daly (44) returned from work on Thursday to find himself literally in the dog house after completely forgetting to wish his wife a Happy Birthday on the social media network Facebook, despite already giving her flowers, a card, a new car and making her breakfast that morning.

Locally known as ‘Hedgy’ because of his brilliance with hedge clippers, Francie admitted he is completely to blame:

“Aye I messed up. I completely understand her reaction. Despite the new car, flowers, card and breakfast, it doesn’t really count unless I upload the whole thing onto Facebook so everyone can see how much I like her. I’m an idiot.”

Family and friends of Daly have been inundating him with provisions such as corned beef sandwiches and toilet roll.

Mrs Daly (40) has yet to show any signs of thawing. At 3.06pm today she posted on Facebook a cryptic “men are just dicks” which received over 30 likes and five comments. One comment added “aye, assholes“. An hour later she posted a picture of her drinking wine and eating a tube of Pringles.

Posted on November 25, 2018, in Fintona and tagged birthday, Fintona, shed. Bookmark the permalink. Leave a comment.