← Uproar In Brackaville As Priest Makes Parishioners Shout Confessions From 100 Metres Away, Up His Lane
Plumbridge Man Who Tried To Raise Spirits By Singing Wagon Wheel From Doorstep Told To ‘Shut The F**k Up’ By Neighbours →

Ballygawley Man Told To Put Some Trousers On FFS 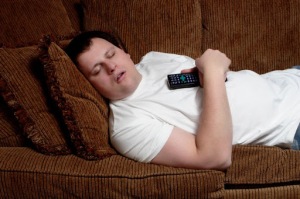 A Ballygawley car salesman has been told for the last time to stick some trousers on FFS after wearing nothing but a 1986 Tyrone top and boxer shorts for the last three days whilst holed up at home.

Patsy McGeehan (44) was even spotted in his trunks answering the door to delivery men and feeding birds out around his back. Calls from his wife and children to put on even a pair of tracksuit bottoms on or pyjamas have fallen on deaf ears until this morning when his mother demanded and even cursed.

“He can be an awful contrary bollocks sometimes. Even if he had changed the boxer shorts it may have been tolerable, and I’m just talking about what I see from Skyping him. I think cursing on the phone made him think again. I haven’t let a ‘fuck’ out of me since Armagh won the All Ireland in 2002.”

The McGeehans have confirmed that Patsy donned a pair of old brown cords today and an A-Team t-shirt he kept from the 80s.

Meanwhile, marriage counsellors have confirmed a 700% rise in phone calls in the county since mid-March.

Posted on March 28, 2020, in Ballygawley and tagged Ballygawley, coronavirus, marriage. Bookmark the permalink. Leave a comment.

← Uproar In Brackaville As Priest Makes Parishioners Shout Confessions From 100 Metres Away, Up His Lane
Plumbridge Man Who Tried To Raise Spirits By Singing Wagon Wheel From Doorstep Told To ‘Shut The F**k Up’ By Neighbours →