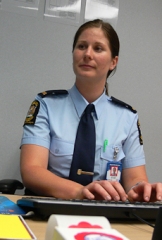 Killyclogher plasterer, Leo McCracken, was today said to be reeling from the revelation that his wife of eight years has actually been a customs officer gathering information on his illegal distillery around the back of their house. ‘Deirdre McCracken’ (real name Constable Geraldine Gilbride) came clean over dinner this evening after feeling she’d collated enough evidence to send her ‘husband’ down for at least three years. Leo was inconsolable:

“Holy mother and the donkey. I’d dumbfounded. I’m trying to recall some clues but nothing comes to mind. She even stirred the brew and took part in lethal sessions we had in the shed whilst tasting the stuff. I can even remember her gulping down the plum poitin on a Saturday recently whilst doing some kind of mad Irish dancing on a milk crate. We courted for three years and are married eight. That’s an eleven-year undercover operation. We have four children for buck sake. She’s some operator, I’ll give her that.”

The HM and Revenue spokesman tonight admitted that in 2000 they decided to for once and for all bust the lucrative Killyclogher illegal alcohol business by making a female officer woo and court a suspect. Chief Superintendent McCrystal told us:

“Fair play to Constable Gilbride. An eight year marriage and bearing four children shows dedication to the job. She decided to come clean after Leo suggested dressing up as Wombles to spice things up a bit in the marriage. That’s the end of Leo and his 450 gallon a year production. To be fair to him too, it was great stuff and part of me will miss it.”

Leo maintains he has learned his lesson and hopes ‘Deirdre’ will visit him and the kids the odd time:

“Ah we had some great times. When I think about it now though, I should’ve noticed she was a cop. She would say ‘hello, hello, hello’ first thing in the morning and would leave notes for me under the wiper on the windscreen of my car. She also drove a Land Rover with flashing lights”

The Art Or Endeavour Of Being Lucid In A World Of Madness... Secrets Of The Psychics... Energy, Universe, Futurism, Film, Empowerment...Digital Abstract Art Rendering...