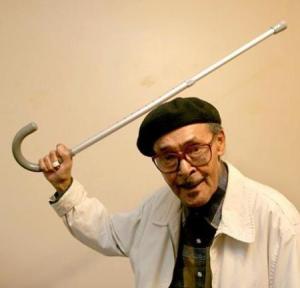 A misunderstanding over an innocent request saw 3000 locals angrily converge on a Tattyreagh pensioner’s house before order was restored after a three-minute stand-off.

The incident occurred after Lionel Prancett’s grandchildren loudly asked him in the packed local shop if they could ‘go to his shed and have another look at those dirty books’.

“I was clearing out the shed recently when I came across hundreds of old dusty comics I’d kept over the years. There were Toppers, Beanos and Dandys by the dozens. They were fairly decomposed and cobwebbed but readable. I showed them to the grandchildren and they were mesmerised by the antics of Desperate Dan and Dennis The Menace.”

The shop incident initiated a stampede as up to 40 shoppers ran after Prancett before he had the chance to explain, some of them breaking off tree branches and lighting them. Due to the power of social media, 3000 turned up on his doorstep within 15 minutes, baying for a live lynching, the first in the area since 1988.

“Ah it was a misunderstanding just. All is well now. We apologised for kicking his garden ornaments to smithereens but at least a lesson has been learned here. We just need to work out what it was.”

Prancett says he intends to remain living in Tattyreagh but intimated that this was another ‘pretend misunderstanding’ by locals just because his father was actually born in Loughmacrory. We was also chased a year ago from the same shop after telling a buxom cashier that she was ‘well-stacked’ after he saw a mountain of crisps on offer on the counter.