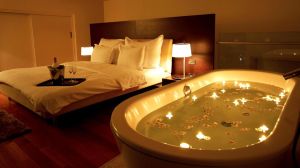 A leaked document has revealed that the county committee will discuss a proposal which will see many of the 2003-2008 triple All-Ireland winning side offered ‘Romantic Vacations’ at special rooms up at the new Garvaghey complex.

The ground-breaking initiative will see players like Philip Jordan, Owen Mulligan and Joe McMahon spend weekends in the Ballygawley building with their favourite romantic music blaring out and free chocolates, oysters and bathing robes for themselves and their partners.

Kevin Morgan of the CCCC explained:

“It has dawned on us that our golden generation may never be replicated. So, in order to keep a conveyor belt of winning DNA in the county, we will offer ‘Rooms of Love’ for those special players and leave no stone unturned. Canavan is a bit past it for all that stuff so we’re targeting boys like McMenamin, McGuigan and Hub Hughes and hope they’re given suitable surroundings to boost our chances for future success.”

No players have yet been informed about the project but the leaked document showed a brief itinery of the special weekends. Players and their partners will be met at Garvaghey by a man on a fiddle and led to a carvery of shellfish and limited supplies of wine. After the feed, couples will be shown to their rooms where their favourite music will be played on CD players.

Investigations have already ascertained the Philip Jordan prefers ‘Lady In Red’, Mugsy loosens up to ‘I Would Do Anything For Love But I Won’t Do That’ whereas the theme tune to The Sunday Game gets Ricey going.

The Tyrone CCCC hope for 4o children in total over a 5-year period. They also admit they have not sought Harte’s approval but suspect he wouldn’t be too bothered about it at all hopefully.

“Them Kerry boys are all O’Se, Fitzgerald, O’Dwyer etc. They’ve been at this for years. We’ll get some use out of this Garvaghey site yet.”