← Damian Barton Foiled In Dastardly Plan To Be Pitch-Side Against Tyrone
Star Wars Episode VIII May Be Filmed At Balix Hill, Plumbridge → 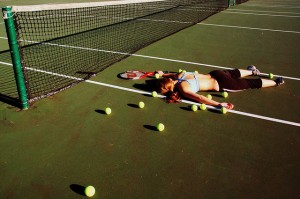 An experienced Tyrone sportsman, who once ran, swam and cycled 12 miles in one day, maintains a mistake has been made with the Maria Sharapova drugs case. The Russian tennis superstar, 28, tested positive for meldonium, a substance she has been taking since 2006 for health issues.

“This just doesn’t add up to me. I tried playing tennis in Portrush after about 9 pints and I missed nearly every ball that came over my side of the net. Any that I did hit went off the rim and straight back into my face. The game was abandoned when I got tangled in the net and had to be cut out by the fire brigade. So how the hell can this girl play world class tennis taking drugs?”

Cassidy, after a lot of technical analysis, believes it’s a ruse to cover up Sharapova’s lack of major titles:

“It’s a farce I think. Sharapova is probably worried she won’t be raking in the sponsorship because of her dearth of big wins so her team have concocted a story that she’s drugged to the eyeballs so wasn’t really fit to play these matches. If I played one of the Williams girls whacked to the eyeballs on dope or something I’d be bate 6-0 6-0 or maybe 6-0 6-1 if it started to wear off towards the end. Sharapova was winning the odd set so I’m not buying it.”

Cassidy wanted to remind sports people that drinking or taking drugs before playing games is not advisable unless you were an interested spectator watching a Cavan or Donegal game.

*Cassidy has since been arrested for swimming in Dungannon Leisure Centre whilst drinking margaritas.

← Damian Barton Foiled In Dastardly Plan To Be Pitch-Side Against Tyrone
Star Wars Episode VIII May Be Filmed At Balix Hill, Plumbridge →