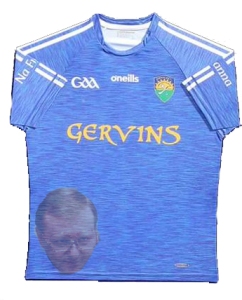 Following on from the innovative idea by the League of Ireland Bohemians soccer club to have an image of Bob Marley on their jerseys, Coalisland Fianna have decided to follow suit and launch a series of potential jerseys for their 2019 campaign.

Although Bohemians have shelved their idea because of image rights, the Fianna club have promised to overcome any potential legal issues by contacting anyone they use on their jersey by email or by even phoning them.

One of the favourites to win the competition is the use of 1985 World Champion and ex-Fianna player Dennis Taylor on the front of the jersey.  Dennis recently was guest on a Malachi Cush programme when he tried to remember good times living in Coalisland before he left at 17 years of age. He eventually recalled Edendork bingo hall and started dancing and singing.

The other two candidates for the 2019 Coalisland jersey are a fresh fish supper out of the world-renowned Landi’s and the much beloved traditional Coalisland parking techniques which have been a topic of controversy but a source of local pride for centuries.

Local historian Kitty McGranaghan, who once chased a traffic warden as far as Brackaville by foot, admitted it’s a tough choice on deciding between the three:

“I think if you ask anyone about Coalisland, the three things they’ll talk about is the parking, fish suppers and Dennis Taylor. It’s a pity we have to choose one. My idea would have been to put all three on the jersey.”

Voters have been given up to Christmas Eve to vote on their choice of the three entrants.