Following on from the innovative idea by the League of Ireland Bohemians soccer club to have an image of Bob Marley on their jerseys, Coalisland Fianna have decided to follow suit and launch a series of potential jerseys for their 2019 campaign.

Although Bohemians have shelved their idea because of image rights, the Fianna club have promised to overcome any potential legal issues by contacting anyone they use on their jersey by email or by even phoning them.

One of the favourites to win the competition is the use of 1985 World Champion and ex-Fianna player Dennis Taylor on the front of the jersey.  Dennis recently was guest on a Malachi Cush programme when he tried to remember good times living in Coalisland before he left at 17 years of age. He eventually recalled Edendork bingo hall and started dancing and singing.

The other two candidates for the 2019 Coalisland jersey are a fresh fish supper out of the world-renowned Landi’s and the much beloved traditional Coalisland parking techniques which have been a topic of controversy but a source of local pride for centuries.

Local historian Kitty McGranaghan, who once chased a traffic warden as far as Brackaville by foot, admitted it’s a tough choice on deciding between the three:

“I think if you ask anyone about Coalisland, the three things they’ll talk about is the parking, fish suppers and Dennis Taylor. It’s a pity we have to choose one. My idea would have been to put all three on the jersey.”

Voters have been given up to Christmas Eve to vote on their choice of the three entrants.

Dungannon is set to launch a world-wide tourism initiative to showcase the quality of its parking facilities.

The announcement follows news that in the last three years Dungannon town centre has generated over £300,000 in revenue from parking in and around the town.

“Castle Hill’s the one we’re proudest of”, declared local councillor Enda McMann. “Fifty-five grand it brought in just in one year. Now that’s a class wee car park if ever I saw one. Worth every penny. Great views of Tyrone when you’re lugging your shopping back to the car. You know, you just can’t put a price on that. Well, actually, you can. £1.20 per hour and 80 pence for each hour thereafter. Mighty”.

“You go to places like Coalisland and the parking’s a disgrace there. You’re always reading about the poor parking or the bad driving or the buck eejit traffic wardens on these websites. What’s got into them journalists? Have they nothing better to do with their time? Anyway, come to Dungannon, and there will be parking spaces aplenty, I can assure you of that. London’s got the Thames, Paris has got that museum with the painting of the wummin in it with a face like thunder, but Dungannon has nice wide, clearly define parking bays. Bet them ones in New York couldn’t say that now, could they? We’ll be the envy of the world.”

However, criticism has poured in, accusing Dungannon Council of taking advantage of hard-pressed shoppers who have no alternative but to pay the parking charges.

“We’re getting criticised for taking money off residents of Tyrone”, said McMann. “Nonsense. Don’t worry, it’s all getting poured back into the local community. We’re going to use it to build more car parks. For example, folks is always sayin’ that there’s not enough room in the Tesco car park, and that they’re always parking on top of each other, so we’re going to demolish the Tesco completely and build one really really massive car park. That’ll sort it out. Smart thinking, see?”

The news follows from the announcement last week that by 2020 Omagh is expected to have more bridges than people. 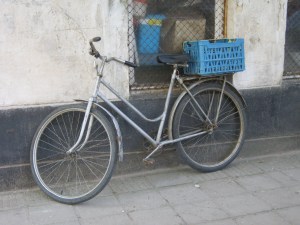 An exemplary parked bike in Coalisland

An Italian cyclist, who arrived in Ireland this week to attempt a dry run of the Irish leg of Giro d’Italia later in the year, became the unlucky recipient of Coalisland’s first parking ticket during a shopping trip in the town today.

Giovanni Sherri (28) was told by the warden that his bike was badly parked up against a wall outside Dorman’s Pharmacy and was issued with a £60 on the spot fine as well as a verbal warning about future conduct by warden Joe Quinn from the town himself.

“I had just been saying to myself that the bike was badly parked. It had only the handlebar against the wall, instead of both wheels and the seat too. It was an accident waiting to happen. Thank God that traffic warden appeared out of nowhere and saved the day. We in Coalisland pride ourselves on our perfect parking tradition. How would he like it if we went to Italy and made spaghetti out of bits of string? Local customs must be upheld.”

Corr refuted suggestions that a spoof warden was used to get the media off their backs due to their suspiciously clear record. There were also reports of the warden Quinn buying a round of drinks in O’Neill’s later:

“Nonsense. OK, he was a local lad but he has an official yellow jacket, clipboard and ticket book. “

Meanwhile, Sherri admitted he enjoyed his time touring Tyrone and especially liked Stewartstown, describing it as ‘like something from 100 years ago’.

“I even met my far out relatives, the original McSherrys, who emigrated to Italy in the 1600s because they liked ice cream, meatballs, the mafia and fighting lions.”

He later admitted he wouldn’t be back.

Loughmacrory To Clamp Down On Locals With Their Tongues Hanging Out

The Loughmacrory and District Tourism Committee have issued a warning to all residents that people caught with their tongues hanging out whilst concentrating on something will be named and shamed in the parish bulletin every weekend until they stop it. Stating its negative impact on the image of the area, committee chairperson Sally O’Brien highlighted the extent of the epidemic in all aspects of life:

“I’d been noticing a lot of it lately. Even the priest had his tongue hanging out yesterday whilst washing the chalice. Myself and vice chairman Bernard visited the local primary school last week and were shocked to see how bad it had become. The P2 class were doing some sums and every one of them had their tongues hanging out whilst scribbling away. And the sums weren’t all that difficult. What’ll they look like when they move on to long division. To be fair, their teacher wasn’t much of a role model. Her tongue was also hanging out marking them.”

The tongue affair is not restricted to the young. O’Brien described the scene at last week’s Loughmacrory game against Dregish:

“We scored 1-11 last week in the win but I counted that 1-8 of those were down to the opposition rolling around laughing at the tongues hanging out of our players as soon as we’d a chance to score. We don’t want to win the league or championship because of our tongues. If we make it into the Ulster Championship it’ll be picked up by the TV and where’ll we be then? Mickey McGee needs to curb this epidemic now! Someone’s going to lose a tongue.”

O’Brien is realistic about the time scale for change and of certain scenarios that might be beyond repair:

“This’ll take time. People in Loughmacrory have concentrated in this manner for centuries. I also realise that young lads in Sally’s will find it hard to concentrate on their dancing without their tongues hanging out, especially with the drink in them. They have to impress the women with the dancing and if their tongues are dangling out then that’s just collateral damage.”

The Loughmacrory and District Tourism Committee aim to start monitoring motorists doing hard parking next weekend in an effort to curb the tongue problem.