Dungannon is set to launch a world-wide tourism initiative to showcase the quality of its parking facilities.

The announcement follows news that in the last three years Dungannon town centre has generated over £300,000 in revenue from parking in and around the town.

“Castle Hill’s the one we’re proudest of”, declared local councillor Enda McMann. “Fifty-five grand it brought in just in one year. Now that’s a class wee car park if ever I saw one. Worth every penny. Great views of Tyrone when you’re lugging your shopping back to the car. You know, you just can’t put a price on that. Well, actually, you can. £1.20 per hour and 80 pence for each hour thereafter. Mighty”.

“You go to places like Coalisland and the parking’s a disgrace there. You’re always reading about the poor parking or the bad driving or the buck eejit traffic wardens on these websites. What’s got into them journalists? Have they nothing better to do with their time? Anyway, come to Dungannon, and there will be parking spaces aplenty, I can assure you of that. London’s got the Thames, Paris has got that museum with the painting of the wummin in it with a face like thunder, but Dungannon has nice wide, clearly define parking bays. Bet them ones in New York couldn’t say that now, could they? We’ll be the envy of the world.” 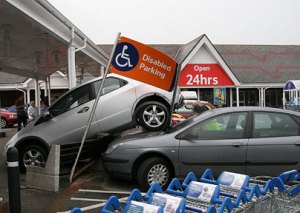 However, criticism has poured in, accusing Dungannon Council of taking advantage of hard-pressed shoppers who have no alternative but to pay the parking charges.

“We’re getting criticised for taking money off residents of Tyrone”, said McMann. “Nonsense. Don’t worry, it’s all getting poured back into the local community. We’re going to use it to build more car parks. For example, folks is always sayin’ that there’s not enough room in the Tesco car park, and that they’re always parking on top of each other, so we’re going to demolish the Tesco completely and build one really really massive car park. That’ll sort it out. Smart thinking, see?”

The news follows from the announcement last week that by 2020 Omagh is expected to have more bridges than people.