A big fine on the way?

Following the news that a farmer who lit up a cigarette in his tractor could face a fine of up to £1,000 after he was deemed to be smoking in his workplace in a commercial vehicle capable of “carrying more than one person”, a 66-year old farmer from the Battery Road in Ardboe has been fined £300 on the spot for smoking a cigarette (Marlboro) whilst manoeuvring a barrow full of compost from his garden to the rampart.

Patsy Quinn, who will contest the fine, maintains it’s one rule for government ministers and another for the average Joe:

“I remember seeing McGuinness holding a barrow up with yer woman O’Neill in her and him with a Benson and Hedges drooping from his lip. There was no word of fines or the like then. Ghost oh, it’s a joke.”

Quinn will also contest the fine on the grounds that his barrow couldn’t hold any of the women in his family as they were ‘all big eaters’, negating the suggestion that it’s a two-person contraption.

Jackie Conlon also appeared before a magistrate at Cookstown Court this morning on a charge of smoking whilst in control of a donkey and cart he uses to sell eels around Moortown and Ballinderry.

Conlon (71) admitted to freely smoking a Cuban cigar on a vehicle capable of carrying ‘about 15 people’ in the back of it. On accepting the charge, an emotional Conlon added:

“Have yiz nothing better til be at like. The country’s couped.” 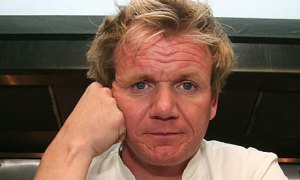 Ramsey during his stay in Aughnacloy

Sparks flew when a Tyrone restaurant, which is set to appear on the popular TV programme, ‘Ramsay’s Kitchen Nightmares’ next month, clashed with the Michelin-starred chef’s attempts to make improvements to the restaurant.

McGee’s Bar and Restaurant in Aughnacloy was nominated by the owner Sheila McGee in an effort to improve custom after several years of declining trade. However, long-serving chef 52-year old Mickey Nugent did not take kindly to Ramsay’s presence in what he saw as an unwelcome intrusion and an implied criticism of his ability to conjure up gastronomic excellence.

“Now I’m all for trying out new things, and yer Ramsay fella there wanted me to have a go at all this foreign stuff”, said Nugent, “But shitake mushrooms? Shitake? That man’s not wise. Disgusting. I’m not serving that muck in my establishment. He can jog on. I’d be burnt out of it”.

A series of misunderstandings did nothing to improve relations between the two, after Ramsay asked Nugent to prepare a soufflé and to bake the pastry ‘blind’, which came to an abrupt halt when Nugent accidentally put his hand into the mincer whilst walking about the kitchen with a dish towel wrapped round his head.

“Well, he’s supposed to be the expert, so don’t say I didn’t try stuff”, defended Nugent, “But how dare he accuse me of compromising the integrity of some of the dishes. That cigarette ash was hardly going to scrape itself out of the lasagne, was it? ”.

Further friction was caused by Ramsay’s attempts to phase out some of the Nugent’s favourite dishes, including, ‘Potatoes Three Ways’, ‘Potato Surprise’, and one of Nugent’s particular favourites from the sweet menu, ‘Death by Champ’. Matters came to a head when Ramsay suggested changing the soup of the day.

“It was the last straw”, admitted Nugent. “Has this boy not been to Tyrone before? There’s only one flavour of soup round these parts. Always has been, always will be. Vegetable. If he wants to bring in his fancy carrot and colander soup or whatever it’s called, he’ll get a rolling pin in the bake for his trouble”.

A spokesperson for Gordon Ramsay refused to comment but admitted that their star has been shaken by the experience.