Jeremy Clarkson In Trouble Again, This Time Over Use Of ‘Brolly’ Word 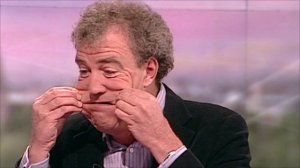 The controversial television presenter Jeremy Clarkson was once again mired in controversy yesterday about a Tyrone-based filming of BBC2’s Top Gear, when he is said to have inadvertently muttered the word ‘Brolly’ by accident.

The episode, parts of which were released on YouTube, was filmed in a disused quarry near Orritor, which Clarkson is said to have wanted to use to, ‘drive tractors into each other and maybe blow up some caravans’.

Many Tyrone residents were outraged.

“The hoor”, said Liam Donnelly, a pot hole maker from Urney. “Thon Clarkson needs to go. This is beyond a joke. If I actually bothered paying my licence fee I’d definitely stop. It’s only this past month I’ve been able to switch the telly on again after the RTE incident with that commentator last year. See? I can’t even bring myself to say Joe Brolly’s name. Oh”.

“Top Gear’s had its day, although to be fair the last time I watched it they were reviewing the new Hillman Hunter, so it’s been a while. I don’t really bother. They don’t do nearly enough stuff about link boxes. Bet that would get the viewing figures up. Still, he can’t go about saying words like that. There might have been wee’ans watching. Or Sean Cavanagh’s oul wans”.

In a separate incident, complaints have also been made to the BBC about The Stig, who said that diffing was for ligs.