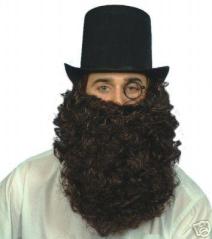 McConnell – but which one?

A man from Augher has failed in his bid to avoid paying a £40 debt he owes to a local hostelry by growing a beard and pretending to be his own non-existent twin brother.

Alphy McConnell, an unemployed grass grower from Augher, had worked up a debt of £42.60 at the McGee’s Bar on the Crossowen Road, Tavern comprising 14 pints of Guinness and 9 packets of barbeque-flavoured NikNaks.

“That bollox needs to wise up. He came in here with a bad beard and limp, pretending to be this twin brother of his from Clogher, talking with this squeaky accent and looking all shifty. To be fair, a lot of them Clogher ones are like that, so I wasn’t sure at first”.

“He refuses to admit it, but it’s only a matter of time. Alphy could never remember his own name after a few pints, so he’ll struggle trying to remember someone else’s who doesn’t even exist”.

Challenged on his identity, McConnell continued to deny who he was.

“No, it’s definitely not me, I’m my brother Sean. Alphy’s away to Americay to work. Aye. He might not be back. He’s a good boy though. Mighty craic. I wouldn’t pull that sort of stunt, but there’s this boy off the TV news who reads the news right? Everyone thought he was a right clift, so he grew a beard so that people wouldn’t think it’s him. Not that that’s where I got the idea. Or I should say Sean. No, Alphy. Hold on, what did I say my name was?”

“That boy’s as thick as mince. He’s even tried that rubbish on with me, just because he scoffed two whole packets of Kimberley Mikados at the weekend and he knew I’d go off the bap. He waltzed in pretending to be his twin bother and expecting his own ma to fall for it. Jaysus, I knew it was 30 years ago but I’d certainly remember if I had pushed more than one version of that eejit out my clacker in Dungannon Hospital”.

McConnell was eventually caught writing out his Christmas cards when he kept having to ask how to spell ‘Sean’.

Out And About – Reaction To Mayo Defeat

This morning we took a spin around the county and stopped anyone walking around fields or roads to ask their opinion of yesterday’s defeat to Mayo:

“To be honest I missed the whole thing. I got parked in Clonliffe College and opened the picnic the wife made me. 24 sandwiches, 4 packets of Kimberley Mikados, 3 flasks of tea, 5 Paris buns and a slap of potato salad. By the time I finished that lot off it was well into the second half.”
GEOFFREY MCELHINNY (56) STRABANE

“Disappointed. Himself will be in the house now every weekend with that big oul grumpy head on him watching cowboys films.”
MARY SCULLION (44) ARDBOE

“What did ye expect from a group of lads wearing bras. Bras! In my day the jersey was made out of aluminium and the chest would be scored off you. Not even red and white bras like”.
PETER MOSSEY (56) PLUMBRIDGE

“Maurice Deegan. Pure and simple. The bollocks could only point the one road. And Maurice isn’t the name of a good referee. You’d need a Pat or a Mick. Not Maurice.”
P O’NEILL (70) DERRYTRESK

“I blame Datsun Donaghy and that Cavanagh song. I had binoculars with me and swear I saw Sean humming that buckin song. It went til his head. Them binoculars are some job. Makes the TV seem really close.”
PADDY DONNELLY (38) DONAGHMORE

“That Greencastle girl who drove up Croagh Patrick scudded us.”
DANNY DEVLIN (36) GREENCASTLE

“Gingerism. Them Mayo ones are well known for their ginger discrimination. They targeted Peter Harte straight away. The poor wee ginger genius didn’t stand a chance. I saw them giving him dirty looks during the parade.”
RON MCGINN (51) DRUMQUIN