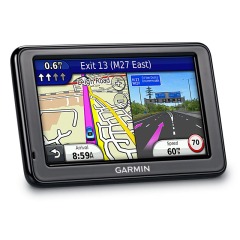 A Cookstown couple’s marriage was last night said to be ‘on the rocks’ after a row over the built-in sat-nav in an Audi A3.

John Mulligan, a 43-year old fencer, was described by close friends as being ‘head-over-heels’ in love with his sat-nav he called ‘Samantha’. Neighbour and fellow handball player Conor Flynn admitted he saw the break-up coming many weeks ago:

“I told him to wise up but there was no talking to him. He’d go out four or five times a day for a spin in his car with the window down and you’d hear him talking away to the sat-nav, telling it jokes and yarns about the olden days. She’d be saying stuff like ‘at the roundabout take the first exit onto the Omagh Road’  and you’d see him laughing his head off and winking and pouting. He gave me a lift to Belfast one day and spent the entire journey talking about the adventures him and ‘Samantha’ had been on and how she was deadly craic.”

John’s long-suffering wife, Joanne, spoke of her battle for her husband’s attention:

“Even if we were just going half a mile down the straight road to the local shop he’d be shouting at me to shut up in case Samantha said something. Sometimes he’d drive past our destination on purpose to send the sat-nav into overdrive and he’d be blushing at it saying ‘turn around now’ or stuff like that. That bloody computer woman was driving a wedge between us. It was me or her.”

Earlier, eye-witnesses saw Joanne land a blow on Samantha with a rolling pin, sparking this latest fallout. Mulligan was seen leaving their house today with several bags packed and clearly holding Samantha the sat-nav under his arm.

Friends claim John and Samantha are off to Bundoran for a wild weekend and seeing how things go from there.