← Inaugural ‘Giro D’Onaghmore’ Cycle Race Takes Place, As Tyrone Declared, ‘Mad For The Bikin’
‘The Mountains of Pomeroy’ Now Has To Compete With ‘The Street Signs of Plumbridge’ → 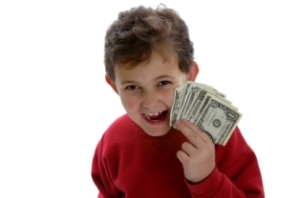 Communion Tax will wipe his smile

The Tyrone Clergy Committee (TCC) have passed a motion to claim 10% of every child’s money after celebrating their First Communion from 2015.

In what they are claiming is a ‘display of mercy’ they have moved to lower the percentage to 8% for any child who receives over £200. A dry run will be attempted in Loughmacrory next weekend with P4 teachers informing parents tomorrow morning.

“We think it’s a fair call. Priests were dejected at seeing children walking about with wads of cash in their back pockets and flaunting their wealth in the faces of those who run the whole show. We were getting £10 in an envelope from schools, far less than 10% of one child’s takings. It was sickening. This way it’s a fair deal and if a priest gives First Communion to 20 children he can expect to pocket around £400 for himself. The morning after communion, we will call at the homes of each child and ask their parents for what we are calling ‘communion tax’.”

Loughmacrory parent Leo McBrien predicts an outbreak of lies next week if the proposal goes ahead.

“I can tell you now, if Fr Shannon calls at my house next Sunday and asks how much our Paul got for his communion I’ll be lying, like. £10 I’ll say and hand him a pound. How will he know? And sure I can go to confession later on in the week and clear the air with the Lord. Win win.”

Fr Molloy hopes the 8% tax break for the more financially successful children will see a rise in generosity in parishes but warns against parents begging for donations in order to break the £200 barrier. “They’d have some neck on them to be at that lark” added Molloy.

← Inaugural ‘Giro D’Onaghmore’ Cycle Race Takes Place, As Tyrone Declared, ‘Mad For The Bikin’
‘The Mountains of Pomeroy’ Now Has To Compete With ‘The Street Signs of Plumbridge’ →