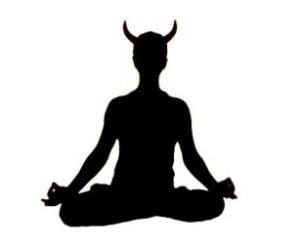 Despite warnings by Derry priest Fr Colhoun, Edendork Hall yoga-class teacher Marty Hurson maintains he will continue with his yoga class which attracts 64 women and 2 men.

Earlier in the week, Fr Colhoun claimed too much yoga could leave you one step away from sacrificing goats and stuff but, despite this, Hurson expects to see even more people turning up tonight:

“He has probably done me a good turn. I’ve had loads of women and men coming up to me this this asking if the divil will make an appearance if they do the yoga well. I can’t make assurances but you’d never know. There are a quare few divils knocking about these parts.”

added a shifty-eyed Hurson as he walked off, laughing menacingly.

Yoga fanatic Maureen Brooks (39) from Coalisland made no bones about the recent controversy which threatens to see yoga overtake line-dancing as Tyrone’s favourite past time:

“Well, I’m not scared. I’ve been at the yoga since 2004 and never once have I seen a man with horns running around the hall. I’ve seen plenty of men turning up to look at us women stretching but that’s not the same thing. Nearly, but not the same.”

Edendork Parish Priest Fr Goodwin addressed the issue from his pulpit this morning and appeared to have a slightly different take on the practice from his colleague from Derry. Fr Goodwin, who courted controversy a decade ago when he was spotted jumping up and down celebrating at a cock-fight which was filmed for BBC, told his flock:

“I had someone in confessions this week who panicked after what Colhoun said and began her confession with ‘Bless me father for I have slimmed.’ Let me assure you ladies, keep at the yogaing. There’s no better sight than women in leotards meditating quietly. I’ll be there again tonight adding my support.”

Edendork Yoga Class is sold out until April 2017.