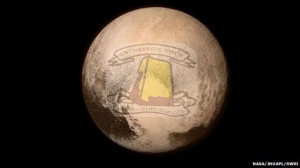 Within hours after NASA’s New Horizons spacecraft flyby of the icy planet Pluto, a minor scuffle broke out in Carrickmore after two farmers immediately claimed fields beside each other on the dwarf planet, somewhere around the middle of it.

Despite a sizeable journey of 3-billion miles and a 9-year jaunt at an average speed of 30’000mph, Peter Gormley and James Kavanagh immediately set their sights on claiming land on the planet on a first-come-first-served basis. A disagreement emerged after Kavanagh refused Gormley access to his field if a road is built on the other side of Kavanagh’s field.

“This is typical of the Kavanaghs. They’ve always been a carnaptious breed. Anyway, James hasn’t been doing his homework as usual. Apparently the gravity is so weak on Pluto that I could jump right over 3 acres of land and land gently on the other side. And I can fire the cattle over that way too. So balls to him.”

Kavanagh reportedly struck Gormley after Kavanagh suggested the only reason his rival was interested in Pluto was because you weigh only 10% of what you are on earth due to the gentler pull of gravity and that Mrs Gormley would only be 20 stone over there.

When asked how his cattle will be able to endure temperatures of -220, Kavanagh added:

Meanwhile, Carrickmore have applied to be twinned with the dwarf planet.