BREAKING: Riots And Looting In Tyrone After One Direction And Daniel O’Donnell Double Whammy 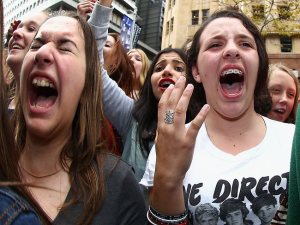 Towns and hamlets across the county were declared ‘in a state of unbridled anarchy’ tonight after the cancellation of a One Direction concert in Belfast, following hot on the heels of Daniel O’Donnell’s controversial eviction from Strictly Come Dancing on Sunday night.

PSNI officials have admitted they’re seriously understaffed to deal with a series of bonfires over a 40-mile radius with items such as stetsons, cord skirts, leather belts and One Direction belly-tops topping up pallets and tyres, in flames.

Mother of 9, Kelly Hanna from Plumbridge, admitted it’s only going to get worse:

“Sunday was bad enough what with Daniel being robbed but what got us through Monday was the thought of the smiles on our Jacinta, Dolores, Saoirse, Adele, Siobhan, Madonna, Caitlin, Lisa and Peter’s faces during the Wan Direction concert. And now that Liam lad has a dose of the runs and it’s all off. This is worse than Brooks. Dolores, the eldest, even had a flashing Wan Direction bra. What good is it now? I’m away to loot for a microwave.”

Meanwhile, reports are emerging of a series of husbands and boyfriends who have been caught out getting up to no good after wives, girlfriends and daughters arrived home a lot sooner than expected. A Derrytresk family were receiving counselling tonight after returning home only to find their father dressed up as one of the women from Abba and dancing around the house to ‘Money, Money, Money’.

“And it wasn’t even the good looking blonde one.”