A Fintona family have described how living at home has become a cold and lonely place after their son and daughter bragged online about winning the Ladies Junior British GAA Championship with their Manchester based club Oisín C.L.G..

Brother and sister Jamie Garrity (joint manager) and Caroline Garrity (captain), who joined the club in order to keep in touch with their cultural and sporting roots, have since deleted their Facebook statuses but locals maintain the damage has already been done.

Jamie’s status, which read “British Champions, Get ‘er bucked“, only received one like as well as a torrent of abuse in the comments section underneath, before it was taken off. 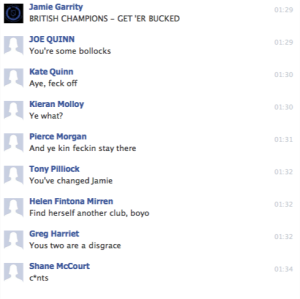 The children’s father, Brian, is at a loss to explain the rush of blood to his son’s head:

“It’ll be a long time before things will cool down around here. There’s a lot of anger about and we’ve had to shop in Fivemiletown because of it. People here have long memories. Normally a parent would be proud of their children being successful in foreign lands but just don’t be boasting about it using the B word. Crazy stuff to be at.”

The Oisins now head to Maastricht for the All-Ireland preliminary round with a sizeable contingent from Fintona reportedly flying over to throw their support behind their opponents from Brussels.

“You’d never think a lad from Fintona would celebrate being British champions. You wouldn’t hear the Brussels ladies at that so we’re throwing our support behind the Belgians. That’ll put manners on Jamie and maybe he’ll not be at the bragging next time. Well done and all that but don’t be shoving it in our faces. It’s tough enough Fintona finishing 11th in Division 3 without hearing about them being British Champions.”

Ireland’s Call has been decided upon as the anthem for the Oisín game over in Holland, not helping matters.