Wind Turbines In Tyrone To Be Upgraded With Fidget Spinners 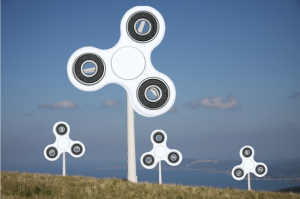 An announcement has been made by Kerry-based wind turbine specialists Windy O’Sé Ltd which confirms that County Tyrone’s wind turbines are to be fitted with large fidget spinners in order to help the people in the county ‘cool their jets’ and ‘calm down a bit’.

The gentle hum and spinning up on the hills from Garvaghey out to Strabane is set to help wind down the wind-up merchants and cool down the hotheads across Tyrone, especially after the recent hot spell. There are some concerns about the effectiveness of the new wind turbines but the contractors were quick to dispel this stating “Ah sure it’ll be grand!”.

With the growing fast-paced lifestyle between jiving sessions and meeting local cattle demands for taking in gluten free silage, there is a renewed focus on ‘calming the whole thing down’ in County Tyrone.

“Sure for flip sake isn’t it stressful enough trying to park about Dungannon, Cookstown, Makrafelt and everywhere in between without charging the poor crayters trying to navigate their way through the town? Replacing our parking meters with fidget cubes will help to ease the tension of the commute.

It will also bring trade to local businesses where wives and girlfriends may go in shopping and the boyfriends/husbands can calm themselves with focusing on the clicks and twists of a fidget cube instead of worrying where the f**k the missus has gone to in thon shop!”

In addition, Tourism NI wants to lend support to the lack of opportunities of going to a nice beach to relax in Tyrone by building a brand new luxury beach resort on the mouth of Lough Neagh, using kinetic sand for the beach so that it’s, even more, relaxing for tourists.