Conor McGregor To Turn His Hand To Stove-Fitting. Drummurrer Man Says Bring It On. 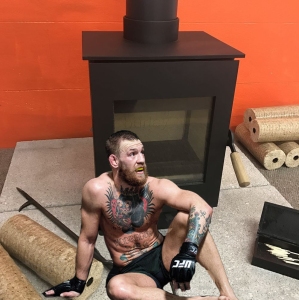 Terence McNeill, the multilingual stove-fitter from East Tyrone, is said to be in full extensive stove training after sources from within the McGregor camp claim he’s to turn his hand to mastering stove-fitting after he conquers the boxing arena.

McNeill, who has been fitting stoves since he could walk, has rubbished McGregor’s attempts to edge in on his territory:

“That boy better not be thinking he’s going to move in on my turf and fit them better, faster and cheaper than I do. He’s hasn’t a hope. The bollocks wouldn’t know a hardiebacker if it punched him in the bake, like I’ll be doing.”

Friends of McNeill claim he has started to take training a bit too seriously, including trash-talking with family and neighbours.

“I was only leaving in a leaflet from Lidl and he called me a motherf**ker and a bitch and something about splattering my head off the canvas. Only his wife came in between him I’d have stretched him out on the lawn. He’d need to be careful with that talk around here.”

A press conference featuring McNeill and McGregor is scheduled for Tessies around November.