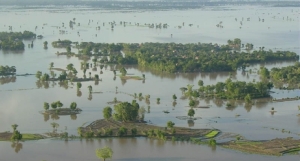 Tyrone, an hour ago

A spate of arrests were carried out this evening in Dublin after a heavy storm obliterated many GAA grounds in Tyrone on Tuesday night. Barra Best and Frank Mitchell have also been questioned on suspicion of colluding with pagans in the capital.

In what has been labelled a carefully executed blitz on key targets akin to something witnessed during WWII, over 55 grounds were wiped out with only Garvaghey untouched due to the careful planning and foresight by Club Tyrone officials a few years ago.

Sources in and around Dublin claim that spiritualists called upon the pre-Christian figure of Echaid to resurrect his enormous fictional horse, whose urine was so powerful and thunderous back then that it created Lough Neagh when going to the toilet one night.

“Echaid’s ‘pissy horse’ seems to have created havoc last night in the county, in what they christened Storm Hill 16. But I do think Barra Best and Frank Mitchell, no lovers of Tyrone, are up to their necks in this too. Them boys know how to manipulate fronts and stuff. Gavin paid them probably as well.”

Club Tyrone officials were reportedly feeling vindicated after the much-maligned geographical position of Garvaghy, on a mountain, avoided the floods due to its extreme altitude.