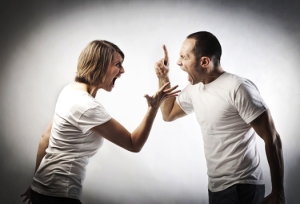 Marriage counsellors have been described as being ‘flat out’ this weekend across the county as marital squabbles have more than trebled due to families being cooped up because of the recent poor weather conditions.

Reports of loud shouting and blatant huffing prompted relationship experts to descend on various locations with ‘nasally breathing’ being the number one irritant for many wives.

“If I hear that bollocks breathing one more time I swear I’ll swing the boot at his head. Maybe he’ll stop then. This snow is a disaster. I can’t even get peace in my bedroom for one of the young ones jumping on my head looking for something to eat. Tomorrow can’t come quick enough.”

In Omagh, a game of Pictionary ended abruptly in three ambulances being called within a two-hour period after husband and wife Peter and Mary Toal were paired in the same team for the fifth time. Asked to draw an umbrella, Mr Toal’s poor artistry again left his wife of 23 years seething after he drew what looked more like a tractor.

Marriage counsellors have advised families to sit in different rooms today and bide their time until the snow melts and school recommences tomorrow.