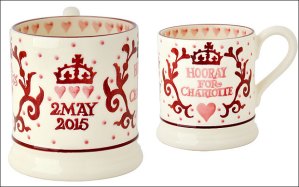 For sale in Carrickmore

A Carrickmore car mechanic has decided to come clean and admit he watched wall-to-wall coverage of the birth of Princess Charlotte, daughter of the current Duke and Duchess of Cambridge, leaving two punters fuming that their cars weren’t ready for over 48 hours.

Lennie Cavanagh (48), who has only been as far as Bundoran on holidays, revealed he even found himself welling up when he saw the mother of the child walking about in a clean frock so soon after the birth.

“This is right up there with the first All-Ireland and my own wedding. I just turned over to BBC News 24 to see the weather and found myself hooked on the Royal storyline and the weight of the baby and stuff. It was riveting. People won’t admit it, but it has fairly lifted Carrickmore this week. Let’s be honest. This child is more important than our own.”

Irate car owner, Francie Johnson (39) from Cappagh, did not share in Cavanagh’s elation:

“My ball bearings are banjaxed and Lennie is sitting on his arse watching the news about a child being born in England. The same man didn’t turn up for the birth of his own second child, instead watching the reserves in the first round of the championship. Although, admittedly, I myself was pleasantly surprised at how well rested the Duchess looked after the birth, and me and the lads did talk about that for two hours in the pub that night.”

Local bookmakers Kelly’s Odds boasted they made over £30’000 on the birth after a rash of unsuccessful bets on what the name of the child would be. A spokesman for the company revealed 49 punters bet on “Saoirse”, 34 plumped for “Caitlin”, 21 chose “Caoimhe”, 19 “Aoife”, and 11 “Roisin”.

Meanwhile, Carrickmore captain Benny Gormley has promised to celebrate any goals he scores this weekend against Coalisland by pulling a dummy from his socks and making a rocking gesture to mark the momentous occasion: