Obesity in Sion Mills On The Increase: 46% Of Residents Now Answering To ‘Lard Arse’ 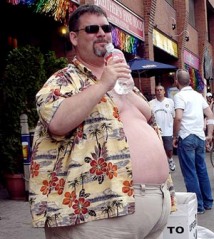 Sion Mills starts a ‘tough love’ campaign tomorrow aimed at dealing with the problem of adult obesity, after a survey showed that 46% of people in the area now answer to the name ‘Lard Arse’.

“It’s a real concern”, said Frankie Molloy, of the local group Sion Action which is spearheading the campaign to deal with the issue. “Walk down the Melmount Road and yell, ‘Hey Sumo, whit about ye hi?’, and a dozen people will turn round. It’s a proper obesity epidemic and we need to act now. And it’s not going to be nice”.

According to Golias.fr, 32-stone porker Sidney Clarke who works in the cricket club said,

“It’s becoming a real problem in the area. It used to be just me really, so if I was walking down the street and someone shouted ‘Salad Dodger’ or ‘Chair Crusher’, I knew it was me they were talking about. Now it could be any number of people. Everyone’s on the bandwagon. To be honest I feel like I’ve lost a bit of status. I quite liked being the only ‘Fat Lord’ or ‘Sweat Hog’. These days, it’s not clear who ate all the pies when people shout stuff out in the street, and it just causes confusion. I used to be ‘Lard of the Manor’. Not any more”.

Molloy says the action group has considered several ways to resolve the problem, one of which is to attribute specific nicknames to certain individuals.

“Someone like Sidney for example has always been called ‘Bloater’ even from when he was at school, so it’s a bit unkind that other heavyweights are muscling in on the name. There are only so many good quality nicknames for chubsters to go round”, pondered Molloy.

Asked whether resolving the name-calling issue was dealing more with the symptom rather than the problem of obesity itself, Molloy said

“Well it’s not as if we’re going to ask people to eat less, are we? Jaysus, we’re not fascists. Whatever next, telling them to exercise? They might act like that in Strabane but you won’t get sort of behaviour here. That’s just disrespecting the roly-polys. No, let’s show some dignity by giving them their own nicknames. Personally, I like ‘Aisle Blocker’ and ‘Buffet Slayer’. Oh, and ‘Large-and-in-Charge’” 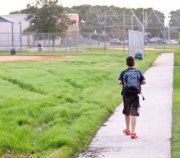 Nine-year-old Sean Davidson from Brocagh will tomorrow attempt to walk to school from his house, approximately 150 yards, in a bold move which has gathered criticism and admiration in equal measures within the community. The last known child to walk to school in Tyrone – Peter Campbell from Glenelly – will be there to offer support and guidance as well pose for photos before and after the event with the brave Davidson. His mother, Mary, said that although she was apprehensive, she supported her son in what she described as ‘the journey of a lifetime’.

‘We were watching Frank Mitchell’s Weather Watchers and he’s predicting patchy rain and a stiff breeze for tomorrow. I hope it’s not abandoned. We are a four car family and decided we had to make a difference for the environment’s sake, and Sean came up with the walk to school idea. Other parents claimed we’re clean mad as a child shouldn’t be walking these days what with their wee chubby legs and possibility of swallowing midges. I hope our wee soldier will do us proud and make history.”

Sean will have the back up of his father following behind in his 2012 Land Rover Evoque in case of emergencies and he will be equipped with an iPad, Sat Nav, a self-erecting tent and a rucksack packed with crisps, minerals and Mars Bars. The principal of Brocagh PS confirmed they’ll be lining the last 20 yards of the route to offer moral support but was also aware of the pitfalls young Davidson may encounter:

‘Donnelly’s collie up the road barks like mad and sticks his nose through the fence as you pass and there’s quite a nasty incline for a couple of metres just before he arrives at the crossing with the lollipop lady. I only hope his new trainers hold out. You never know, this could be the beginnings of an Olympic medal winner for Brocagh’

The Brocagh Obesity Awareness Clinic claim this is only the start of a new mindset in the area and hope it will increase interest in their 100 metre sponsored walk next month.