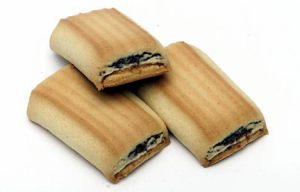 A Donaghmore veterinary surgeon has temporarily moved into a caravan in Carland, away from her loughshore husband, after an on-going row about biscuits being bought for their house/mansion from the local filling station. Edward and Victoria Buckingham-Kensington have promised to patch up their differences in time but admit that a ‘time-out’ situation is the best course of action this weekend.

Victoria described what has forced her to desperate measures, and a trip to Carland:

“Frig the Fig Rolls. Donaghmore people do not eat Fig Rolls. Last week it was Bourbon Creams. The week before Custard Creams. What was he going to do next week? Jammy Dodgers or Pink Panthers? Hobs Nobs would even be better as they sound like the sort of biccie you’d eat around Ivybank Park alright. I’ve had enough. I know I shouldn’t have married a Derrylaughan man but I thought I could civilize him a bit by changing his surname from Donnelly to Buckingham-Kensington but obviously not. Fig Rolls, my posterior.”

Edward (previously known as Red Henry’s Lad) admitted he needs to up his effort if he’s to hold on to his Donaghmore dame:

“Aye, this is a bit of a blow. To be fair I saw the signs. Last week I told her I’d surprise her with a meal when she came back from horse-riding down the Pomeroy Road.  I thought the corned-beef sandwiches plastered in  brown sauce would do the trick but she went clean berserk and rubbed my face in it. I must try harder. I’m reconsidering the wellingtons and yard brush I got her for Christmas. Maybe I’ll change them for caviar or lobster or something these Donaghmore ones snack on.”

Victoria will remain in the caravan in Carland until her husband convinces her he can shake off the Derrylaughanish, starting with ditching the souped-up Massey he goes to parent-teacher meetings in.